On holiday today - no not on strike , just getting my time in before the end of the month. Got some more Russian infantry based sat out in the sun on the patio. Think I will have to alter my basing medium - the Basetex I  have is rather runny and have tried adding more sand but this does not seem to help, it is very difficult to place around the figures bases . Will get this batch done using it and then try my old standby - ready mix Polyfilla . Think I will rebase some British infantry next and see how they look , pictures soon !
Posted by Mosstrooper at 10:47 1 comment:

Email ThisBlogThis!Share to TwitterShare to FacebookShare to Pinterest
Labels: Crimea

Been rebasing my ancient Peter Laing Crimean armies - well got a start at least !. 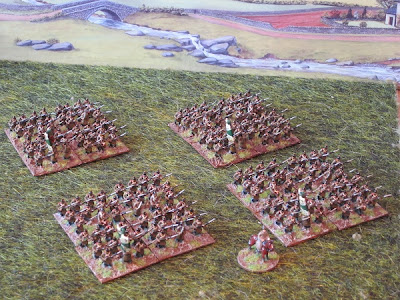 4 Battalions of the Azov infantry regiment 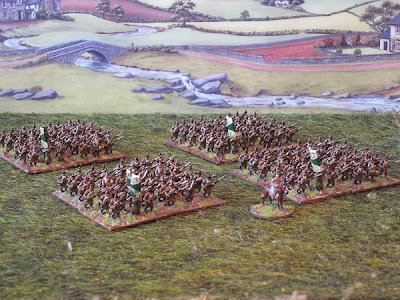 I must have had these figures for 30+ years, painted hundreds in about 1 year . Each infantry Battalion has 44 figures in it and if my memory serves me correctly I have in total 17 Battalions ! , that's (pauses to find calculator on computer) - 748 Russian infantry - bloody hell ! I must have been really keen in those days  , mind they were only about 5p each then . Not to everybody's taste , but in my eyes they had a certain style and after all these years - rebased don't look to bad . I must have about 450 + British infantry plus cavalry and guns all of which need rebasing so this may take some time . Have used several sets of rules over the years and with this revamp may try out Black Powder with them .
Posted by Mosstrooper at 11:09 No comments:

Email ThisBlogThis!Share to TwitterShare to FacebookShare to Pinterest
Labels: Crimea

Sorry no photos of the finish of this game . The battery went flat in the camera and doesn't want to charge again , it seems to be the fault of the charging unit and as its still in warranty it is being replaced - but I have to wait 3 days till a new one arrives. Well to cut a long story short the Austrians lost - making 2 blunder rolls in one move did not help ! their Jaeger had to retire and the French infantry charged and trounced the Grenz . The other Brigades Grenz blundered and had to retire . The French CinC advanced on all fronts and overwhelmed the Austrian battery - a sad veil was drawn over the shambles that was the Austrian army . A French win - helped by luck - Napoleon said 'give me a lucky general' ! and thats what he got this game ! .
Posted by Mosstrooper at 06:22 No comments:

Move 4 started with the Austrian Hussars making a blunder roll and had to advance to their right . The French cavalry charged them 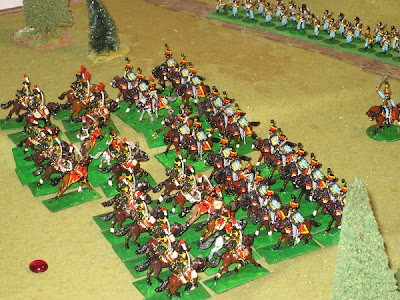 The French infantry were held up by fire from the Austrian Jaegers and were disordered 2 moves running . The second French battalion moved up on its flank and moved into the rough ground to take on the Austrians . 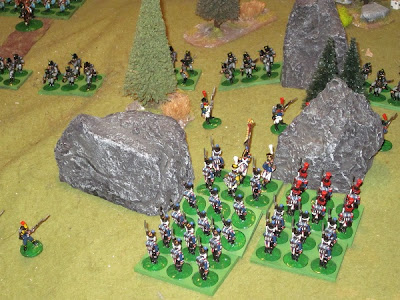 The cavalry melee ended with the Austrian Hussars retiring back as did one of the French units . 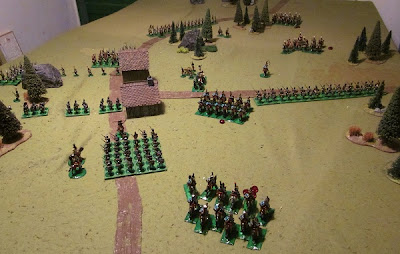 This is the position at the end of move 4 , I'm slowly getting back into the swing of things with Black Powder , for Napoleonics it is perhaps  not as 'cute' as General D' Brigade but is quicker to play solo .
With another 4 moves to go , the French I think will have to be a bit more aggressive . The Austrians need to get more of their infantry into action ....... 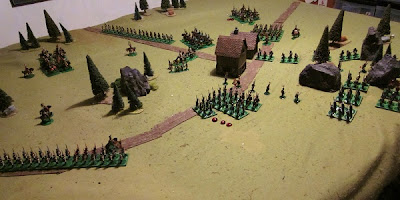 The little red gems are casualty markers - I need to make some proper ones with casualty figures
when I get around to it . To be continued .....
Posted by Mosstrooper at 13:13 No comments:

As a break from painting and gaming SYW I have decided to set up a small Napoleonic game . I  will be using Black Powder as this gives I think a quick game and is easier to play solo than General De Brigade . I must admit my Napoleonics  have been pushed onto the back burner of late whilst I have been concentrating on other projects (see my other blog) . I also have not firmly decided which rules are my favorites , I  have been using - Black Powder , Gen D Brigade and a couple of Old School sets, all have their merits - and faults or rather drawbacks . I think I may settle for playing them all and just picking which one I fancy at the time . This game is a clash of advance guards to control a valley in advance of the main body of the army . The Austrians have the classic - Hussars/Grenz/Jaeger combination and the French - Hussars and infantry . The French have the edge command wise , but the Austrians are slightly stronger but have a weaker moral . I will play for 8 moves and then dice for the arrival (1st move 6, 2nd move 56, etc) of the main forces , the game will end then . I think it is important when playing solo to have a definite cut off point to finish a game. 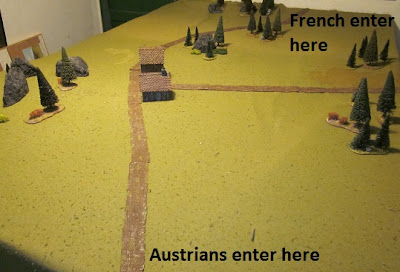 The general layout of the encounter 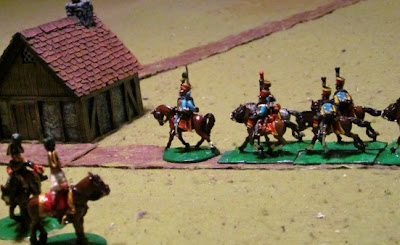 Austrian CinC  watches the Hussars move up to position 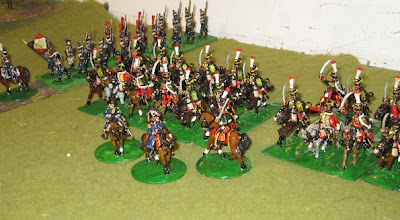 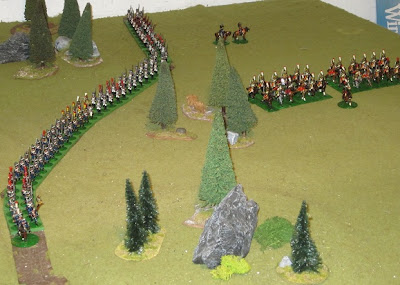 The French infantry move swiftly up the road 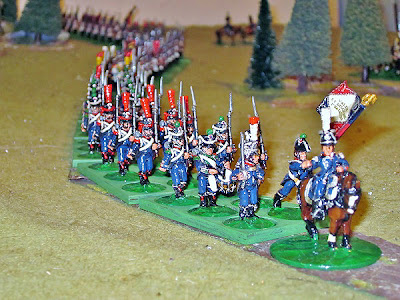 The French are lead by a veteran battalion 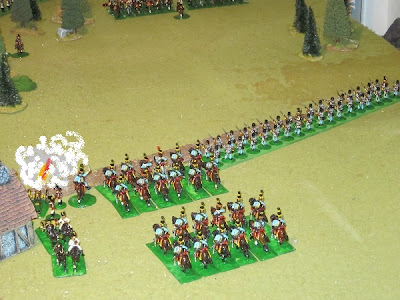 The Austrian form line and their gun opens fire 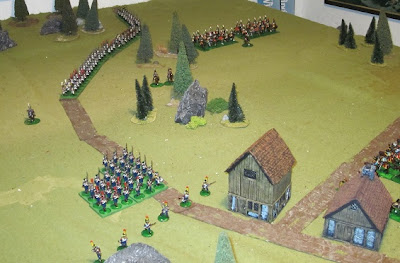 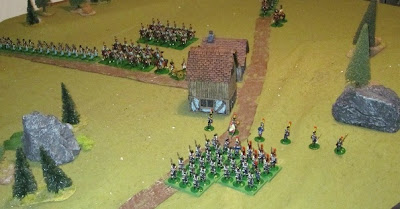 The Austrian left is being threatened
To be continued.......
Posted by Mosstrooper at 06:06 No comments: 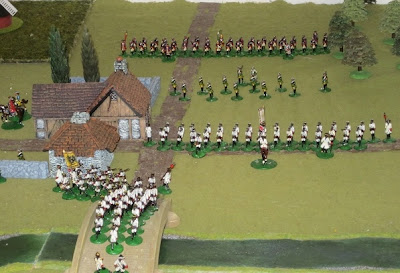 The Austrian pushed over the bridge , the Prussian Jaegers fell back before them . The second battalion of Austrian foot crossed the bridge and started moving to the left flank. 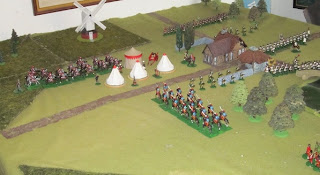 The Austrian Hussars reorganised and the Prussian Hussars moved to clear the camp and deploy. 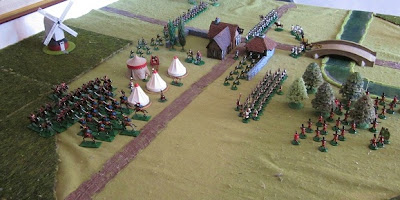 The Austrian Hussars charged the Prussian cavalry . The Austrian infantry starts to deploy to hold the left flank . 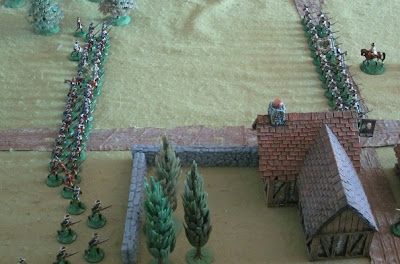 On the right the Prussian foot deployed and the opposing lines started to open fire . 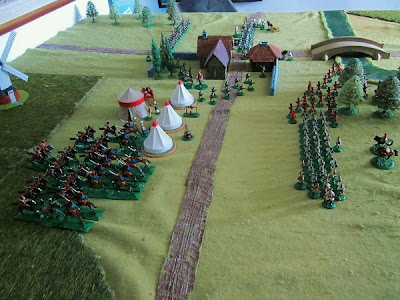 The cavalry melee ended in a stalemate and after the second move both sides broke off and  rallied back . The fire fight on the right flank continued and the Austrian infantry were forced to retire with most of their officers being casualties ( The Brigadier was wounded twice but survived !) . However the Prussians also started to receive heavy losses from the Austrian battalion guns . 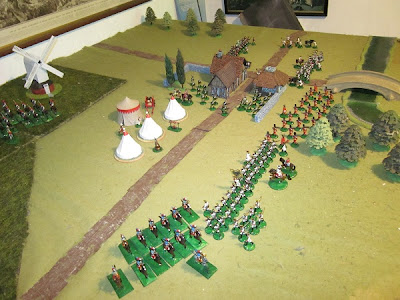 In the centre the Austrians deployed their infantry and the Light infantry units started firing at close range . With 20 moves played it seems that the Prussians will not be able to retake the bridge as their cavalry had been driven off and their infantry had started to loose heart - they still hold the inn but with no artillery support the Prussian CinC decided to retreat . The Austrians had lost a lot of Hussars and one of their infantry battalions is very shot up , but are in a strong position with two almost untouched units and their two guns . The second game I think will be a Prussian counter attack on the bridge - I will move the terrain down the table to allow the Prussians room to maneuver. 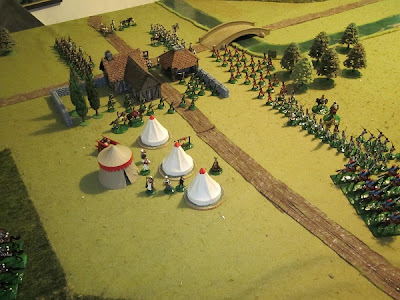 A good game , think it could have gone either way . Man of the match was the Austrian Brigadier who was hit twice in the same move and made the two required saving throws (5 & 6 on D6) his added morale bonus held the infantry unit together after most of their officer became casualties.
Posted by Mosstrooper at 11:56 No comments: