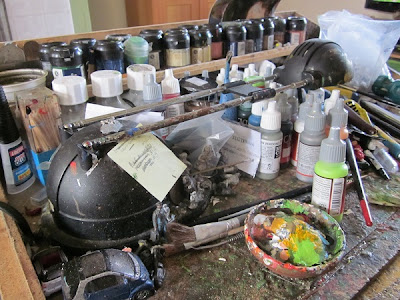 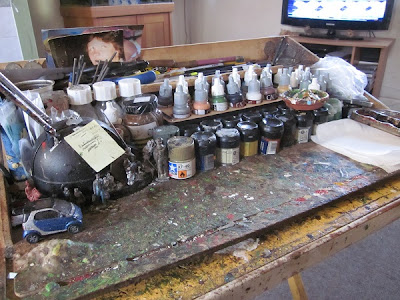 AFTER !
Been having a bit of a clean up , got rid of a lot of old paints and reorganised my painting tray . One factor is that I have started using Vallejo paints , having found that our local 'Boyes' sells them - so no more trips into Games Workshop to be cross examined by some spotty youth on "what are you painting now ?" - and the baffled look when you say - "Seven Years War Hessian Grenadiers !". Plus they are cheaper and seem to have more in the tubes. How long will it remain tidy ???? 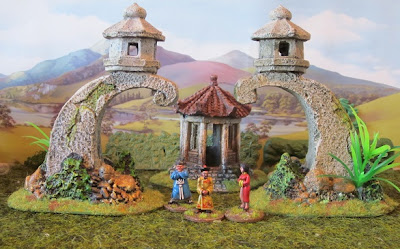 Was at 'Pets at Home' the other day and I always look at the aquarium section as there can be things of use for gaming and I came across the above on a 3 for 2 offer so I could not resist them !. 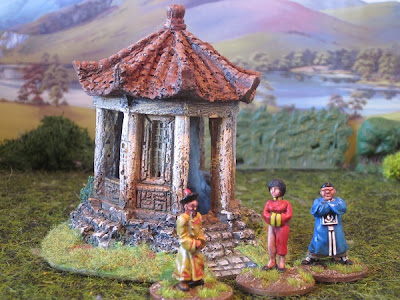 Was not sure what I was going to actually do with it , but it has Oriental overtones so it will be Fung Shwei's garden of earthly paradise !.I add MDF bases and tarted them up a bit . 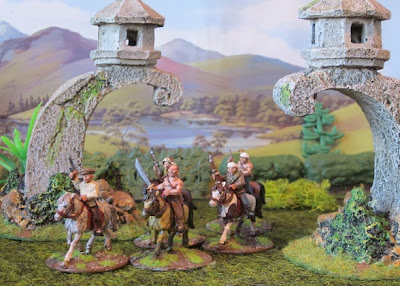 But in this garden there are serpents ! - Bandits !!!. Hopefully this scenery will be featuring in future conflicts !.

This map shows the locations of the opposing armies at the end of the first quarter move of Day Two of the campaign . The Red Stars mark the encounters between light cavalry units - these will be played out on the gaming table and the games will appear on this blog . (click on map to enlarge)

Posted by Mosstrooper at 08:19 No comments: 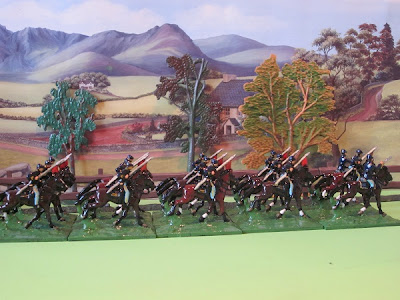 A couple of years ago I bought a lot of plastic Spencer Smith 30mm ACW figures and I have just got around to painting some of them up. 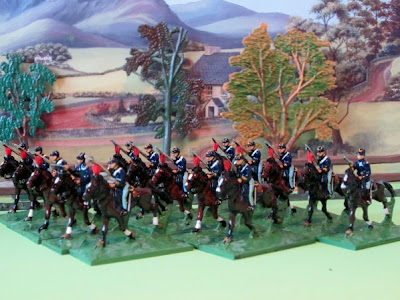 Amongst them were some plastic Uhlan type cavalry - from their Napoleonic range (?) , I decided to convert them into the 6th Pennsylvania Cavalry or Rush's Lancers as they were better known, by trimming the czapka into forage caps . 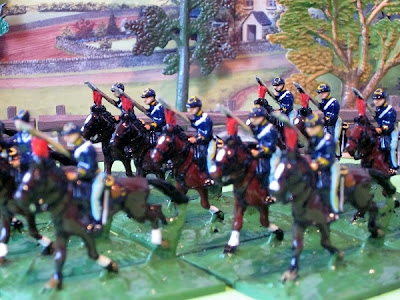 Being plastic they were a bit of a problem to paint but a couple of coats of yacht varnish sorted that out . I have some more plastic cavalry which I will be painting up as Confederate 'Black Horse' cavalry .

Well the campaign has begun after a trouble start because of problems with my Internet ! Grr bl***y technology !. Please click on the above map to enlarge , the white squares are the positions of Austrian forces and the blue Prussian ones . Both sides have objectives but their enemy don't know them as yet . My wargaming colleague 'S' is in command of the Austrians and 'A' the Prussians .I am using the campaign system from Grant's 'The Wargame' and the movement rates are as follows -

Each of the small squares equals a 1" , looks like there could be some actions on the morrow and these will be played out on the table top .

Return of a Old Friend

Been sorting out some old rule sets for disposal and came across my copy of DBA version 1 , I sold all my DBA armies years ago as I had stopped using them and flicking through the rules was struck by the elegant simplicity of them (before the morphed into DBA 2.2 or whatever they are now !). I began to think I should start playing them again - simple and fun for solo games and a campaign system too !. I decided I would rebuild my Greek Hoplite armies as I seem to remember having some cracking games in this period . I have chosen Chariot Miniatures Greeks and have got enough to do a Greek Hoplite, a Spartan and a North Greek Army , 'A' was kind enough to pass on some unwanted figures as well . I've dug out my relevant Ospreys and have made a start of painting them (the great thing about DBA was always that you did not have to paint masses of figures), after painting 30/40mm figures going back to 15mm is a bit of a re-learning curve and I've decided to go with shield transfers as well . Here are the first few bases painted. 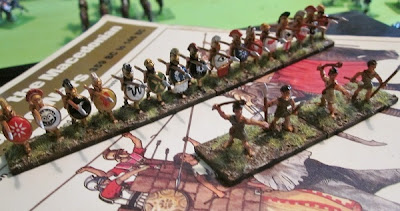 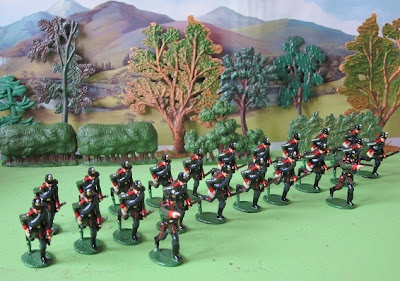 After some delay I have finished off the initial order of Spencer Smith F.P.W. figures. 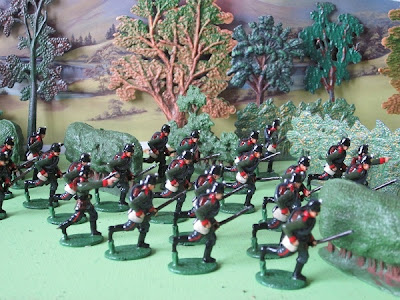 With these Prussian Jaegers this gives me 3 units plus a gun per side - enough for a small skirmish !. 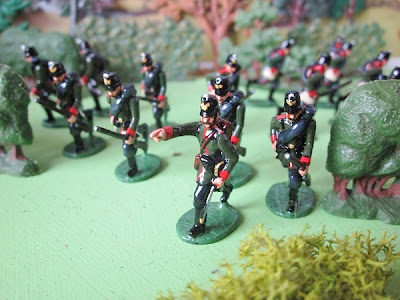 I have enjoyed painting these figures and when monies become available will send off another order for some cavalry .

A wet Bank Holiday and 'home-alone' (my dearest working) so I have been playing on the computer designing a campaign map using 'Paint' . We will be using the Grant campaign system from 'The War Game' and my 30mm Spencer Smith collection .

Please click on it to enlarge , I am hoping to get a couple of my gaming friends to be the Prussian and Austrian commanders and to publish the various moves of the campaign on this blog . I have tried running this type of campaign before - with varying results ! - maintaining order between the opposing commanders is a problem and keeping on top of the paper work are a couple of the troubles when running a campaign !. Hopefully using the computer to store the moves and maps will make it easier. Too be continued.