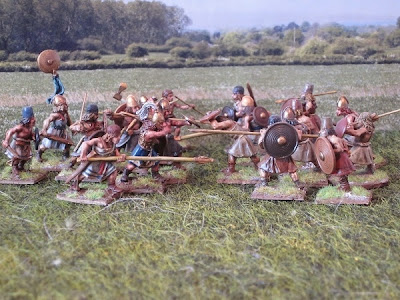 I have taken some more photos of my North European Bronze Age collection , above a selection of various warriors in combat . 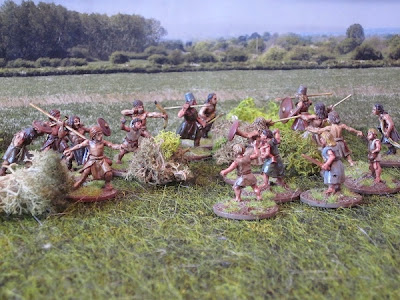 Skirmishers - skirmishing ! , mainly Foundry but with the odd Warlord figure (I think?) thrown in . I did quite a few conversions as there are not many variants out there. 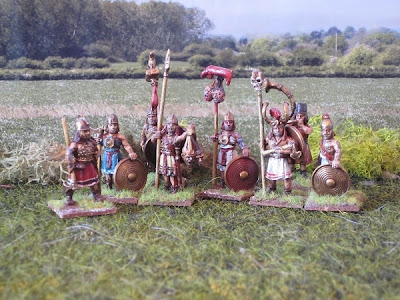 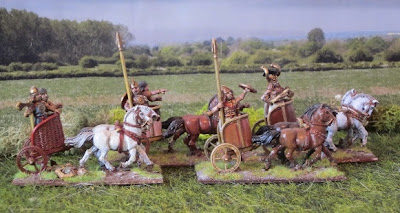 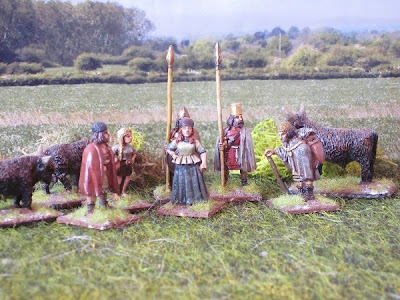 A domestic scene- again Foundry figures , the cows are Gripping Beast , I have some pigs as well to paint up for this era . I have found that photographing these figures has got me interested in this period again and I am planning to paint up the few remaining figures I have . 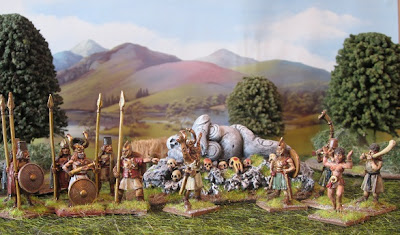 Quite a few years ago or little group were into 'Warhammer Ancient Battles' rules and I must admit they revitalised or 25mm Ancient collections , this was also the era when 'Foundry' did some amazing army deals - really cheap ! (how times change). This prompted me to purchase 2 Bronze Age European armies , not the most popular choice but at that time I was actively involved in archaeology and this era fascinated me as it still does . 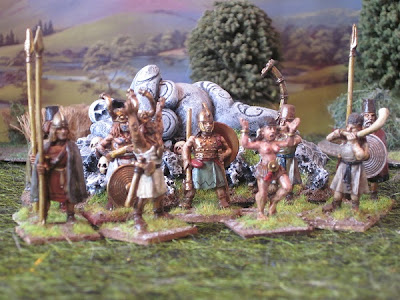 I did a lot of research into the dyeing and textiles preserved on various 'bog bodies' to get the right colours (there are a series of books by a Danish professor with wonderful name of  P.V. Glob !) and painted them up .Sadly they have not seen action for many years but I still  hold them in great affection, perhaps sometime in the future I will dig them out again and use them. 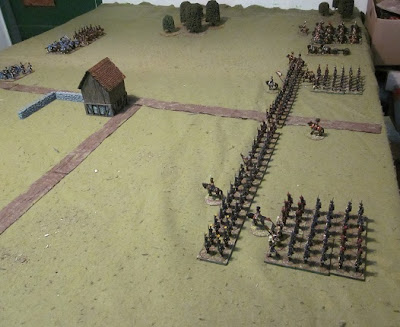 At the weekend 'A' called around and we set up and played a small Gen d' Brig game to remind me of the rules. In the past we played them a lot using 15mm figures but this was my first time using my 25mm figures and the new edition of the rules. I had 2 brigades a infantry one and a cavalry , set up as above. 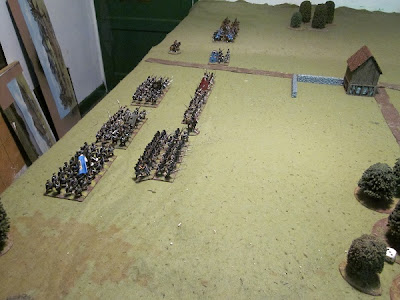 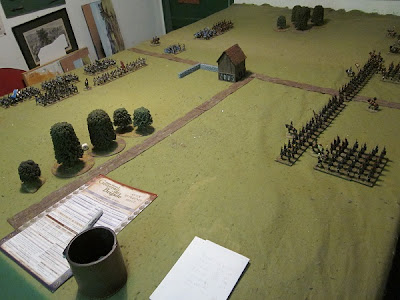 We had agreed on a simple head to head meeting scenario . 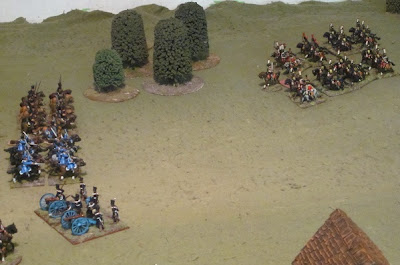 To start the ball rolling I sent my cavalry to attack his cavalry - from this moment on the game went down hill for me !. 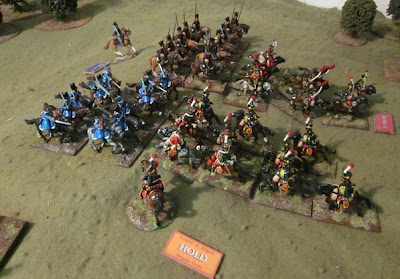 My cavalry are driven back - then when he follows them up they break and flee the field ! 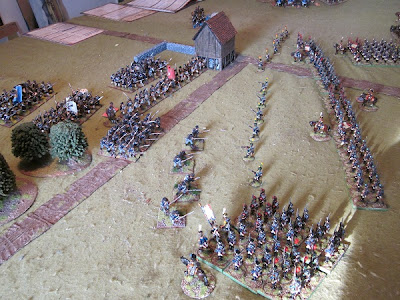 My infantry advance and a protracted fire-fight begins in which my men don't seem to be able to hit a barn door !- and it gets worse ! 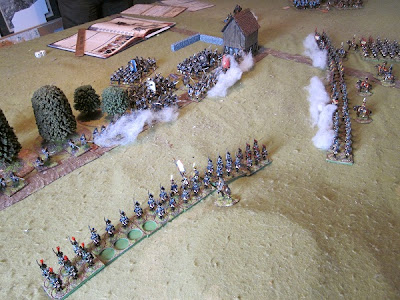 In desperation because my right flank is exposed to his reforming cavalry , I decide to charge him ! 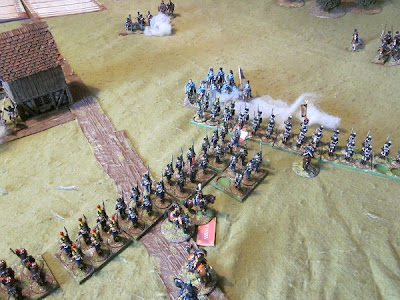 Not only did my infantry fail to charge home but his cavalry charged and caused my flank unit to flee . This meant adjacent units had to take morale rolls - which they failed ! , this meant I had to take a Brigade morale test which my Brigade failed ! - and fled the field ! 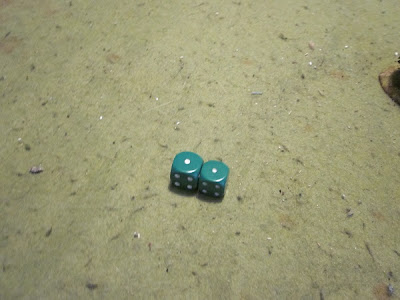 A sample of my dice rolling !. Although I had a run of bad luck - even 'A' admitted he was lucky , the game went well and although we were a bit rusty at times with the rules I am keen to have another go at them . 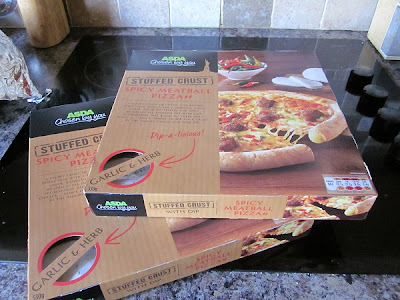 The victory feast for Generals that do not fear calories !

On my other blog I was telling of my problems finding a suitable set of Napoleonic rules with which to play games using my 28mm Foundry figures (http://tinsoldieringon.blogspot.co.uk/2013/01/napoleonic-problems.html) This has been highlighted by reading 'Incomparable' a regimental history of the 9th French Light Infantry during the Napoleonic wars . I am usually very careful what I read on the military side of things as it can send one off on a tangent ! but I fell into the trap as the book is very good and so I began thinking about my abandoned 28mm armies . Having the weekend to myself somewhat I sat down and listed all the various Napoleonic rules I have tried over the years and scored them out of 10 , to my surprise the rule set that seemed to tick the most boxes was - General de Brigade ! . The only problem was my collection was originally designed for a 'Old School' type system and the individual basing and paint jobs reflected this . 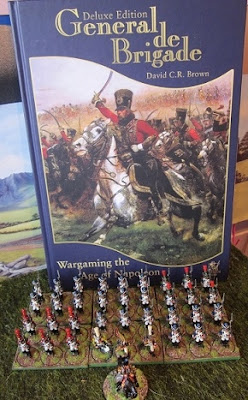 So I thought about re-basing them ! - I HATE  re-basing ! , then I remembered the movement trays I had got from 'Warbases' which would hold penny sized figure bases . I decided to do a bit of an experiment so I coated the figure bases and the trays with a fine layer of 'Basetex' waited till it dried and dry brushed it and add static grass. 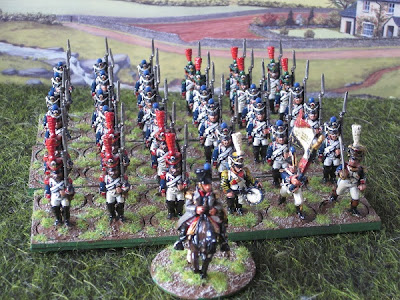 Here is the result, I will leave the figures a high gloss but redo the bases as above . 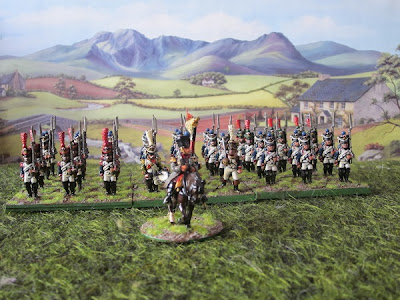 Another photo of the first French regiment done - 65th Ligne. This is going to take a while but I think it will be worth it in the long run !. 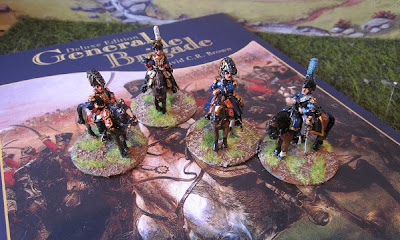 A group of Generals meet to discuss how they will perform under the rules. I have had the new edition of the rules since they came out a couple of years ago but have not really sat down with them to study them properly , although I played the old edition a lot about ten years ago -a good set of rules but it is important not to let the games get to big as this can slow them down . So myself and 'A' are planning a small game this next weekend to try them out again - I hope to report on a successful game , Too be continued .......