Blowing up the Bridge (3) 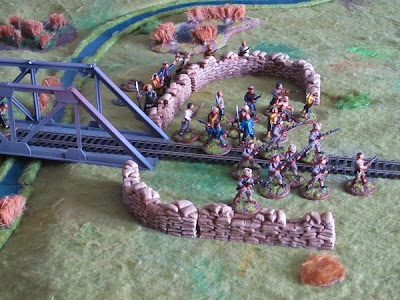 The White Russians and Bandits charge across the bridge as the remaining 'Reds' flee !. 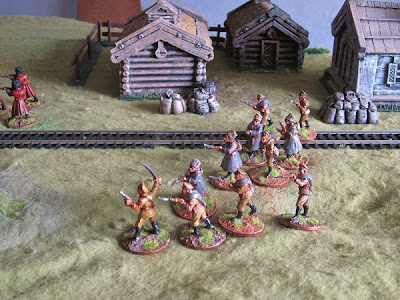 Some more guards are alerted and move towards the bridge. 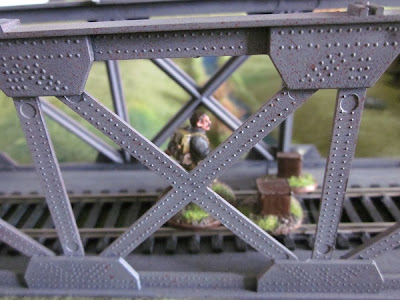 D'Anger gives his bearers a shinny sixpence each for delivering the explosives and they scamper off to safety . He sets to wiring up the charges ready to blow the bridge. 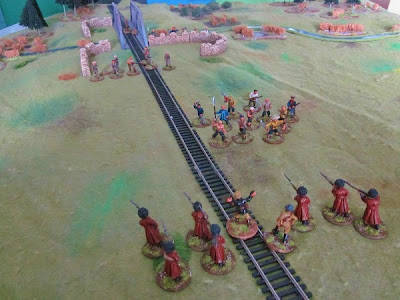 Suzi Wong and her band charge the Russians but fall short and start to take casualties. 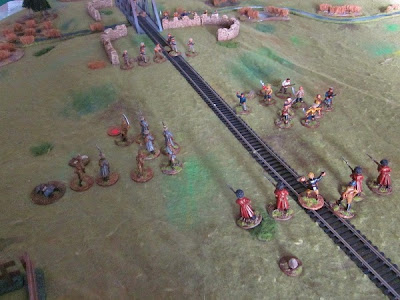 The new unit of guards charge towards towards the bridge but are pinned down by the 'White' Russians and fail their morale roll and flee !. 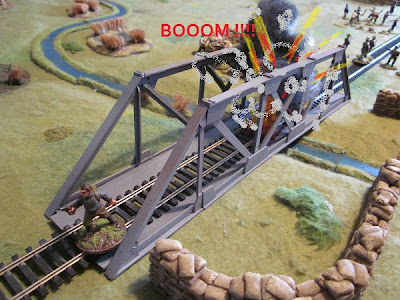 At this point D'Anger got very lucky ( he needed to roll a '6' on the first move to set the charge off , a '5'or'6' on move two etc ) and rolled a '6' and was able to set the explosives off destroying the bridge !. This will prevent the Bolsheviks transporting the captured Royal family to Moscow by train and so they will have to use a cross country route . D'Anger has now time to plot a rescue attempt . Too be continued ....

Blowing up the Bridge (2) 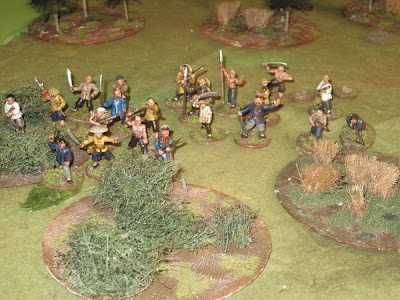 The game started with the 2 units of Chinese bandits breaking cover and charging towards the bridge , the Bolsheviks opened fire on them killing one figure . 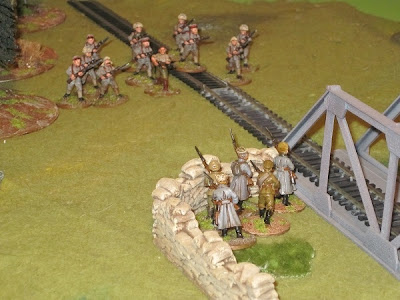 Hiram Holliday and the 'White' Russians charged down the railway track towards the bridge. 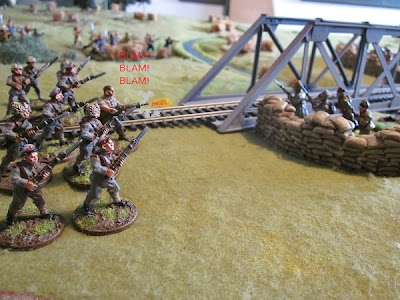 Hiram opens fire and pins the 'Reds' down . 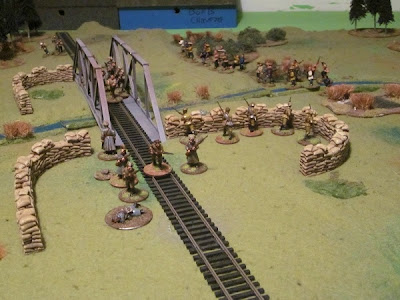 The 'Whites' charge and the pinned 'Reds' flee . 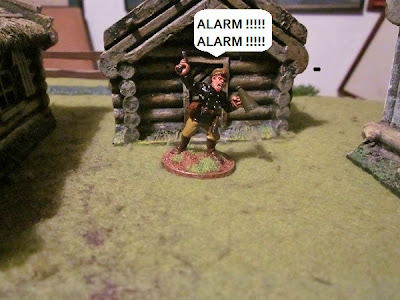 All this shooting awakes the Commissar Ivan Borodin (the Red Hero). 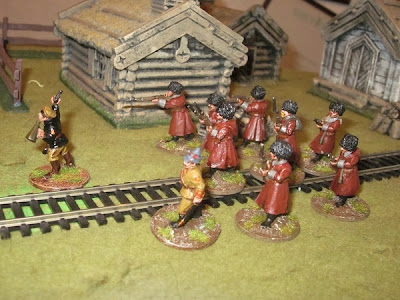 He alerts the veteran Siberian Rifles and they rush to reinforce the bridge. 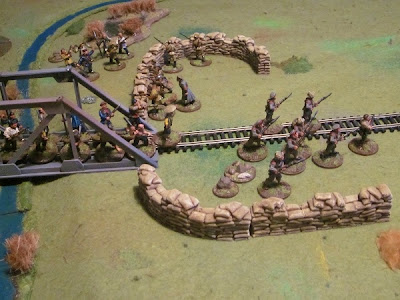 Hiram leads his unit across the bridge under heavy fire losing 3 men (the little groups of pebbles on coins keep track of the suppression's caused on the unit, these reduce the units efficiency, when they equal the number of figures left in the unit they must take a moral test). The bandits also charge across eager for loot. 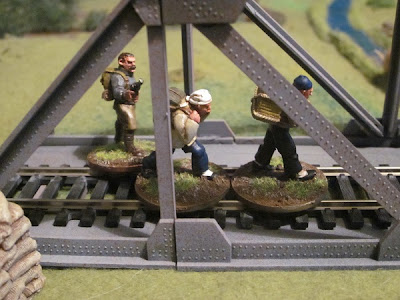 D'Anger and his bearers move onto the bridge , things are going to plan - so far ! . Too be continued......

Blowing up the Bridge (1) 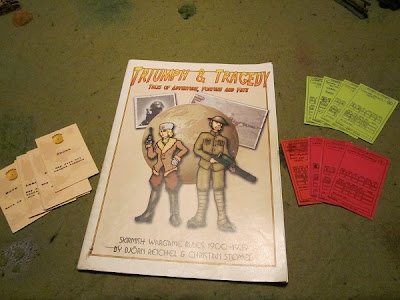 I'm ready to play my first game using 'Triumph & Tragedy', each unit has a card with it's stats on it - red for the Bolsheviks , green for the Allies. The others are the order cards issued each move to each unit as it is activated. In the past I've used these rules a lot and found them a easy and fun set to use. 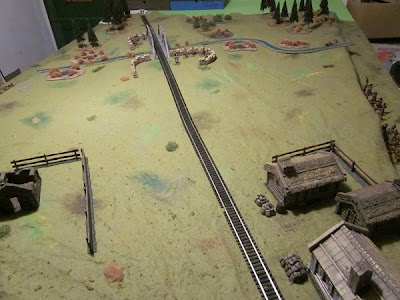 The table set out , the bridge which the Allies have to blow up to prevent the Royal family being move to Moscow crosses a stream. , Although only a minor structure it is not well guarded and its destruction would take many days to repair in this remote region . 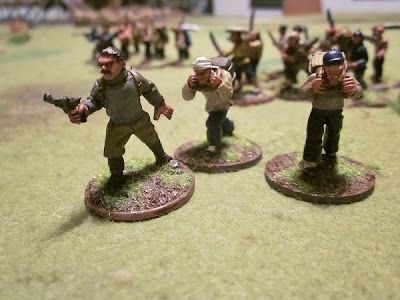 Captain D'Anger counts as a hero in the rules (one per side) and his 2 bearers carrying the high explosives to demolish the bridge. 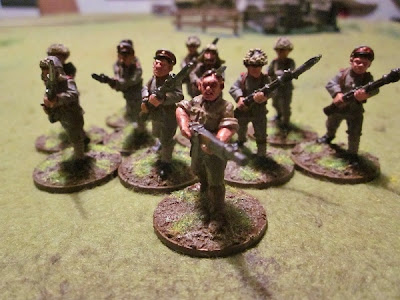 American Hiram Holliday (with his trusty BAR light m/g) and a group of 'White' Russian soldiers in the service of the local Chinese warlord (veterans) who has loaned them to ingratiate himself with the British. 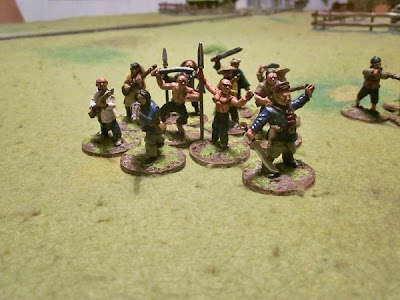 A unit of Chinese bandits lead by Soh Long loured by the promise of British gold sovereigns and loot. ( untrained and only half armed with rifles) 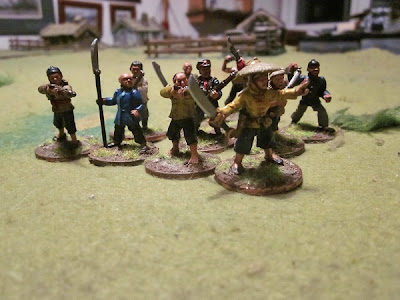 Another unit of bandits lead by his enigmatic daughter Suzi Wong (untrained and only half armed with rifles), her reasons for joining the attack  are not yet clear. 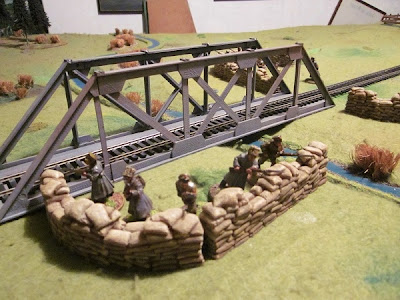 The guards at the bridge (untrained) .The remainder of the force are asleep in the station buildings nearby. It is dawn and they are blissfully unaware of what is going to happen. 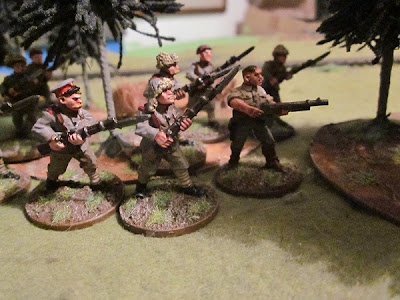 Hiram and his men move forward under cover of the woods ready for the signal to attack the bridge. 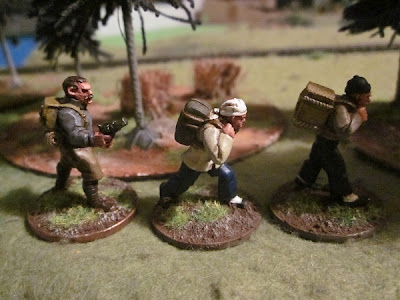 D'Anger 'encourages' his bearers forward - they are less than happy about carrying their loads of explosives into action. Both sides point values are equal (450 point) and about 36 figures aside. Too be continued....... 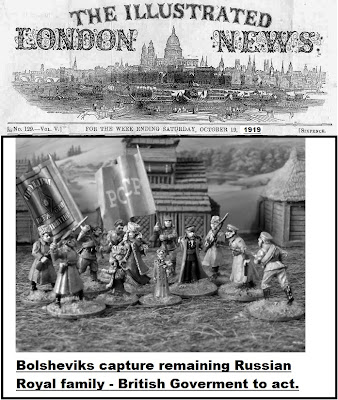 After the elimination of the Tsar and his family at Yekaterinburg the Bolsheviks made great efforts to round up any of his remaining relatives . This resulted in the capture of Prince Gorky and his family , this was reported in the British press and forced the Government to try and make a rescue attempt so that the Prince and his family can be used by the Allies and the' Whites' as a figurehead to rally support. 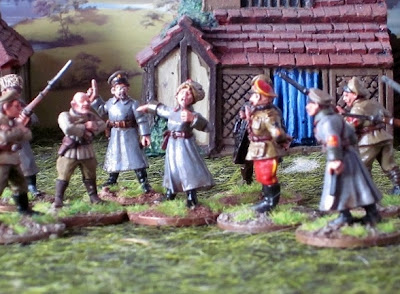 The local Committee argue what to do with their captives - opinion's differ between shooting them out of hand or transporting them to Moscow , the debate is vigorous !. 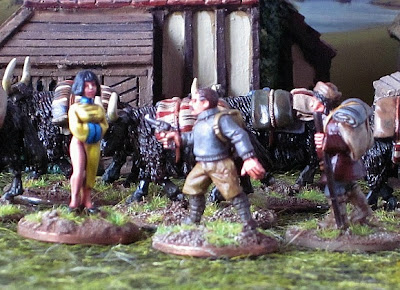 The British must act swiftly, their only 'man on the ground' is Captain D'Anger of the Royal Engineers (and all round good egg)  busy on a surveying trip in the Hindu Kush . On being alerted he crosses the border with a Yak caravan and meets his contact a mysterious Chinese beauty . He is immediately suspicious of a double cross but has no other choice but to believe her as he must start a rescue mission at once before the Reds can carry out their beastly plan !. Can D'Anger rescue the Royal family - too be continued .............

And Now For Something Entirely Different - Again 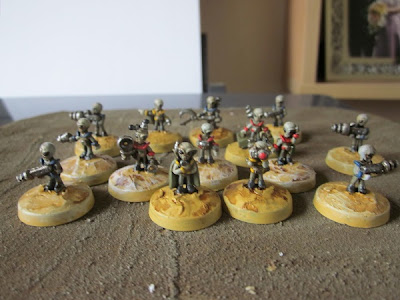 Every now and again I get the felling I want to paint something totally different from the run of the mill stuff I'm doing , Whilst searching under my wargaming table (a dark and potentially dangerous place - head protection should be worn - the number of times I have bumped my head !) I came across a box of 15mm Sci-Fi figures . Years ago I played a lot of 'Laserburn' and  these were purchased cheap off a bring & buy at a show to be reinforcements I think . They had never been out of their packets so I decided to clean them up and base them . 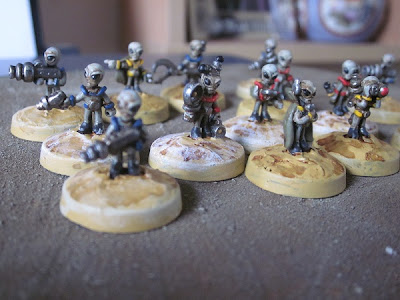 They are based on 'the little grey men ' of  Roswell fame, not sure what I am going to do with them as I remember 'Laserburn' were rather complex, but there must be some easier modern rules out there to use them with. 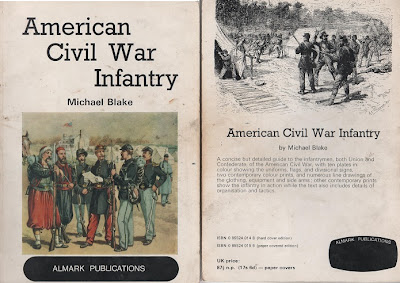 I was sorting out my bookshelves the other day and came across this rather battered slim volume , This book set me off painting ACW armies - a process still in motion to this day . Published by the now defunct Almark publications in December 1970 (soft back - I could not afford the hard backed edition back then) for the princely sum of  17s 6d or 87 and a half New Pence . In this age of the Internet and Amazon it is hard to imagine what a influence and resource this small book was to a beginner wargamer , colour prints of exotic Zouave uniforms and regimental organisation all thing almost impossible to find then but just a few taps on the keyboard now. It had me repainting my plastic Airfix ACW  collection and reinforcing it with numerous other units .Almark were a giant of the modelling- wargaming hobby back in the early 70s , but somehow just disappeared to be replaced by Blandford and Osprey, I had to wait a couple of years for the accompanying  ACW cavalry book to come out and the artillery one never appeared (click on photo to enlarge).
Posted by Mosstrooper at 05:04 6 comments: