OS F.P.W. Project -In the Begining. 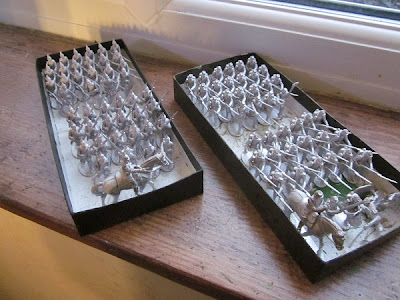 Well the first order for my new project arrive and was put under the Christmas tree , opened on Christmas morning and then  found out I had made two schoolboy errors - NO superglue ! and NO black spray paint ! Grrrr !. The infantry figures come with a separate arm/weapon which needs gluing on - normally don't like having to glue figures but when I got some glue I found these fitted perfectly . With no flash and very little cleaning up I soon got them ready for spraying up. There are two Prussian line battalions and mounted command figure and a French line battalion and a Chasseur battalion plus a mounted officer. I am very impressed with the figures and am looking forward to starting painting them . More photos when I get started.

In the Nature of an Experiment

Not sure how well this will work - just messing around with photos etc  and added a soundtrack - give it a go !
Posted by Mosstrooper at 01:27 5 comments: 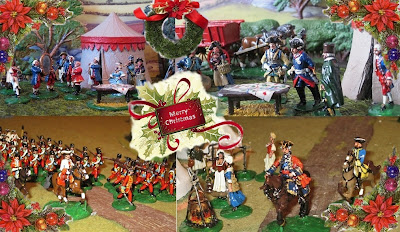 Seasonal Greetings to all my fellow bloggers , wishing you all the best for Christmas . 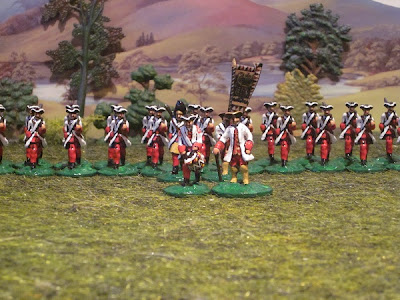 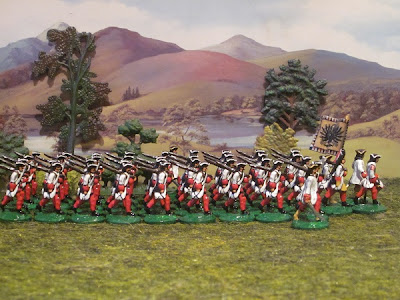 Glad to have finished it as I wanted to clear my painting table ready for my O.S. FPW project . The first order of which sits beneath the Christmas tree. I got the uniform information for this regiment from the excellent SYW  website
http://www.kronoskaf.com/syw/index.php?title=Main_Page 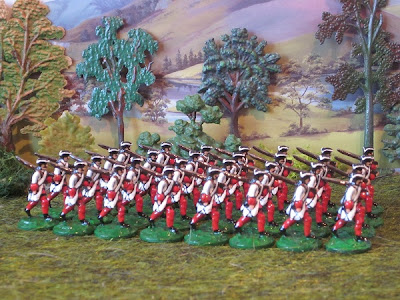 Just a quick update on the painting of the Hungarians which has been delayed for the lack of varnish . A new tin being purchased, the Regiment will soon be finished with only 6 more rank and file and the 6 Officers / musician to finish off . I always like varnishing as it seems to bring the figures to life (and hides mistakes somehow) . Will photo the completed unit when it is finished. 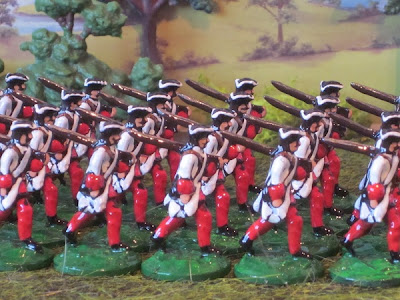 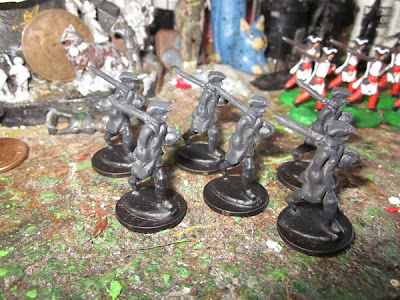 The batch of figures I'm going to paint undercoated with black spray paint. 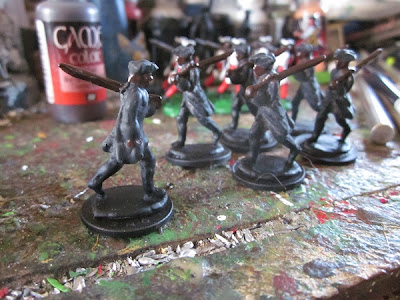 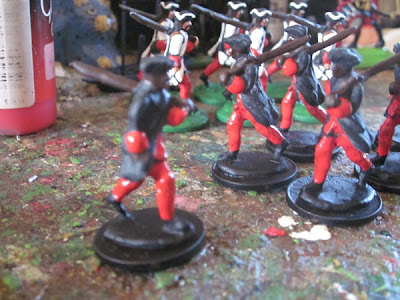 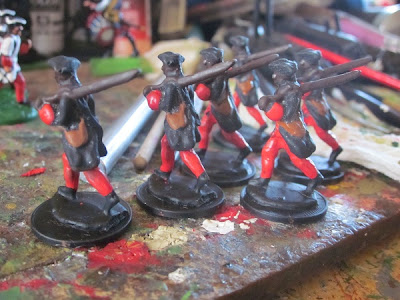 The knapsack and strap painted brown. 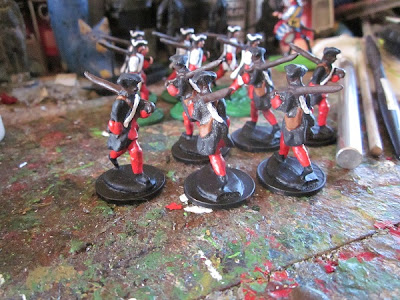 The cartouche strap is lined in with white. 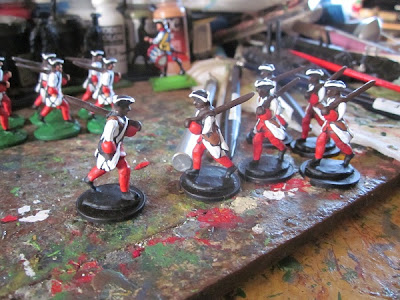 The coat , turnbacks and hat lace are painted white leaving a thin line of black to define the straps and turnbacks. 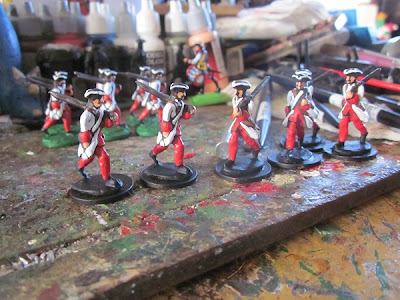 The musket barrel is painted  and the hands and face are painted in leaving a touch of brown to suggest facial features and moustache. 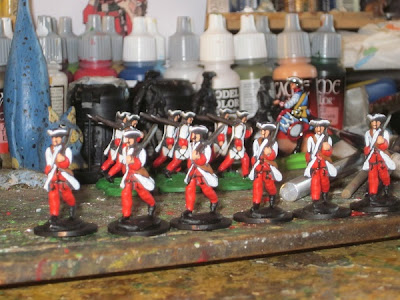 The lace work on the waistcoat and trousers is painted in. 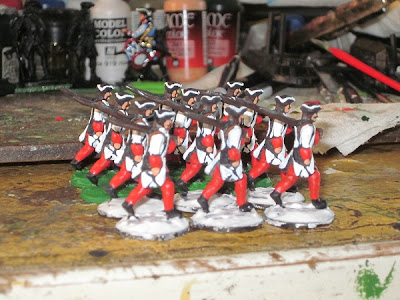 Poly-filla is applied to the base and given time to set . 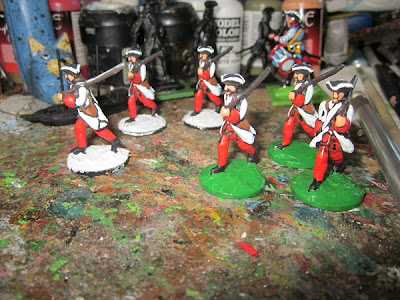 When dry they are painted a nice bright green . 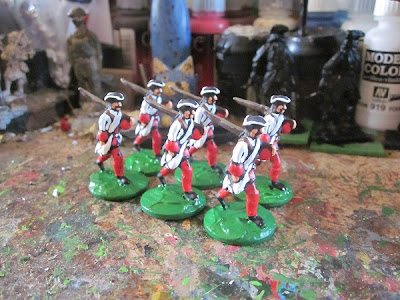 The new recruits march off ready for varnishing . Only another 24 to do ! 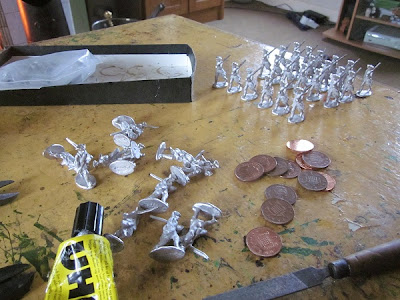 A cold and grey day up here in N.W. UK so I thought I'd get some figures ready for painting . This is a order I got from Spencer Smith miniatures several weeks ago and will be a Hungarian regiment of foot for my 30mm SYW collection. First clean the figures and glue to bases . 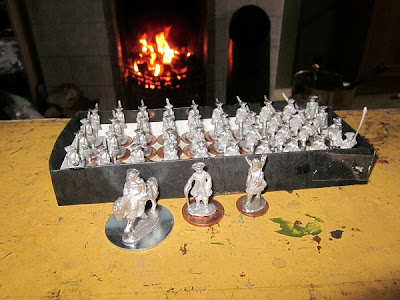 The regiment is done and ready for spraying , there is also an extra mounted staff officer to paint - he is mounted on a large mudguard washer . It being cold I had lit the fire which is blazing in the background . 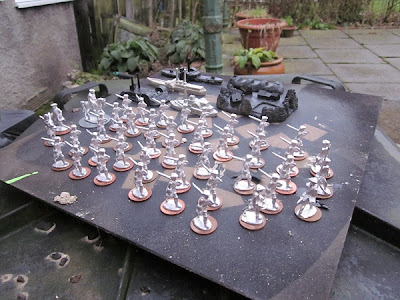 Ready for spraying . Rather a bit of a mix to spray, some Peter Pig ACW  ships and scenery in the background. My neighbour who brings the wheelie bins in after the refuse waggon has called said "I always know your bins as they always have black paint on the lids (Oops !). Will continue when I start painting the figures next week.

Been tidying out a cupboard and came across these old photos of various wargames I have played , the quality is not great but these date back when cameras had rolls of film in them. 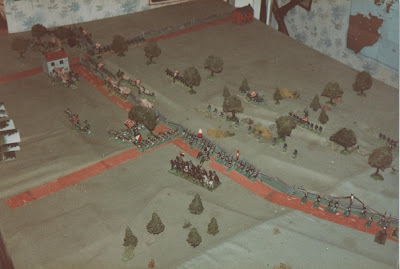 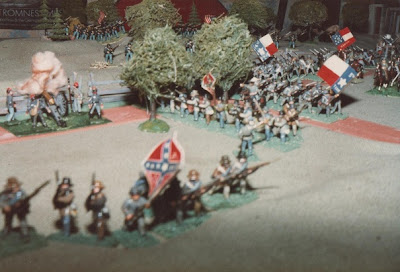 Another shot of the same game , the roads are cut up plastic floor tiles if I remember rightly . The experimentation in dyeing didn't work very well did it ! , in this modern era of purpose made felt cloths we tend to forget how hard it was to get suitably coloured material in the distant wargaming past . This game dates I think from about the mid 1980s. 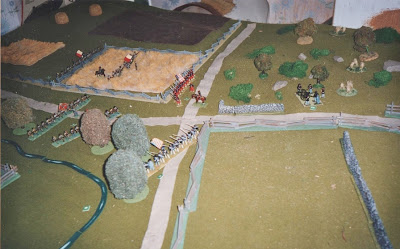 A slightly later game of ACW  using 'Johnny Reb' rules (think I can make out some of the little green markers that came with the game) . Notice I have a proper felt cloth now - purchased at great expense from Standard Games. The wooden fencing was made by my father in his retirement. 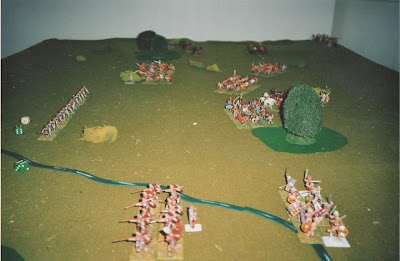 A Romans versus Ancient Britons game , these figures had a renaissance when Warhammer Ancient Battles rules came out - they had languished unused when I got sick of playing WRG 6th edition rules with all their complexities. 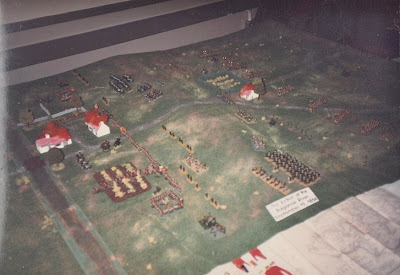 Now two golden oldies, in the late 70s (?) I and another chap called Dave Cliff (?) put on a demonstration game at the Victorian Military Societies meeting at the United Services Institute in London of the action at the river Bulnak in the Crimea 1854 - a small skirmish which we turned into a full blown battle , with me loosing the Light Brigade !. 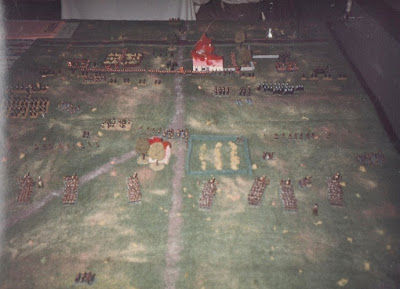 Another view from the Russian side . We used Peter Laing 15mm figures and adapted the WRG Horse and Musket rules , the scenery and cloth were provided by Dave. Much to our great surprise we won best game award ! . Most of the figures I still have but need rebasing to modern standards .
Posted by Mosstrooper at 04:13 8 comments: