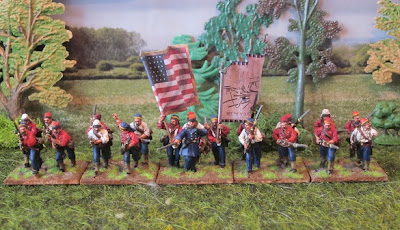 I bought this unit of Perry figures at Reading and have just got them finished. 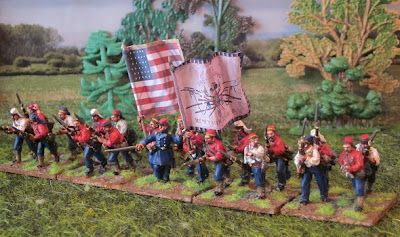 They are wearing the second issue uniform , the first being a grey one . There is quite a bit of conflicting information on their dress and I based mine on Don Troiani's epic picture . 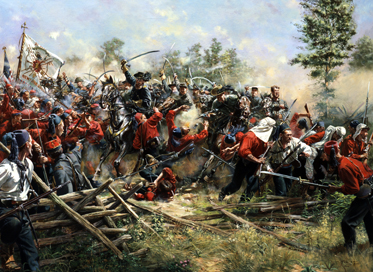 I copied the Regimental flag off the internet . 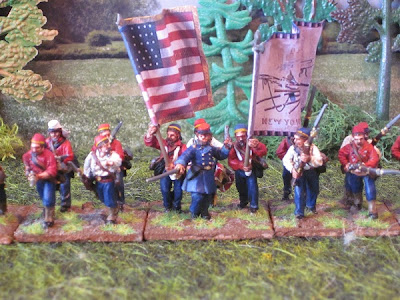 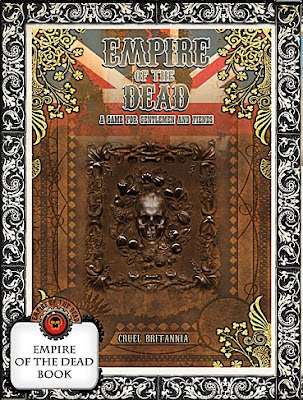 West Wind are going into Gothic Horror or 'Steam Punk' , 'Jack the Ripper' , Sherlock Holmes, Vampires and all that Victorian fantasy/horror sort of  thing . VERY tempted !, have got some Victorian pulp type figures already so that would be a start , Hm I  am hoping to attend Salute (helping S&A Scenics) so I must keep an eye open for them - there are free starter rules as well - http://www.westwindproductions.co.uk/catalog/download/eotd_quick_start.pdf Oh dear I feel another period coming on !.
Posted by Mosstrooper at 10:43 1 comment:

Flushed with the success of the Italian unit stats sheet I have done a British one which illustrates the units I have in my collection . Have laminated them both and they should help speed up the game . (click on photo to enlarge)
Posted by Mosstrooper at 11:49 No comments:

Getting ready for the release of the new FOW rulebook I decided to make a info sheet with all the unit stats at a glance of each army. Above is my attempt at the Italian one. (click on photo to enlarge)
Posted by Mosstrooper at 11:04 No comments: 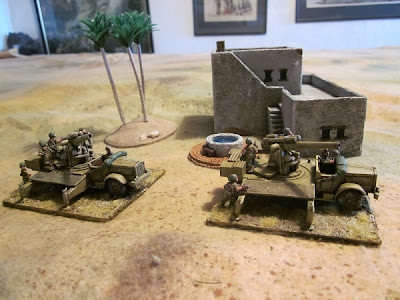 These where a real pain to put together ! . They are 102mm Naval guns mounted on 6 ton Fiat trucks. The building and well are ready painted from 'Battlefield in a box' . 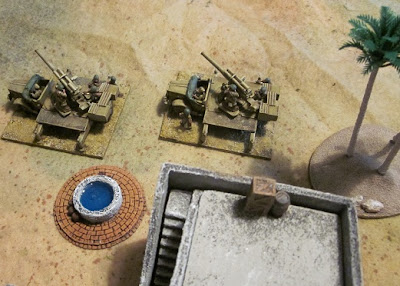 I am rather pleased with myself - all the FOW models/figures I have purchased over the last 6 month or so are now painted and ready for action - tick VG ! ( if only I could accomplish  this with other areas of my gaming ! )
Posted by Mosstrooper at 09:07 No comments: 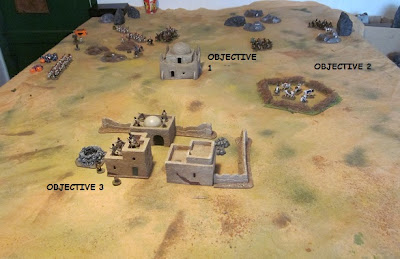 Both of us having the day off 'S' and I  decided to play a game , the choice was 'S's and having not played TSATF  for a long while it was the natural choice - light hearted , easy to remember/play rules . Above is the table with the 3 Objectives which the Egyptians had to reach , 1 blow up the Mahdist HQ , 2 capture the cattle , 3 poison the well. 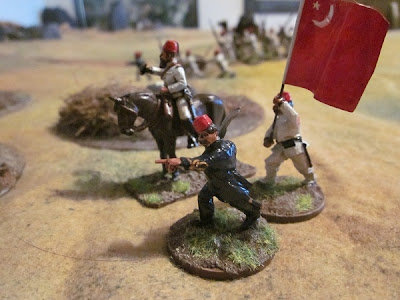 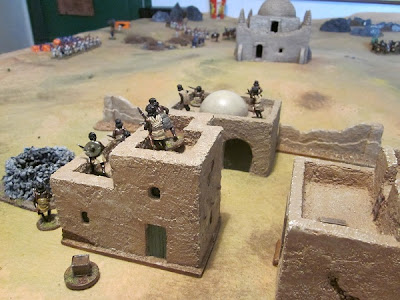 Mahdist riflemen lie in wait in the village . 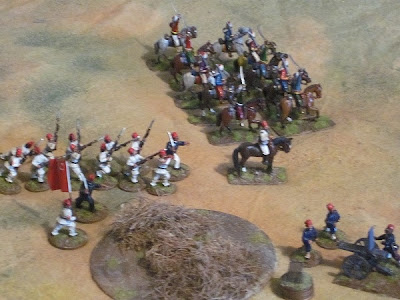 The Egyptian forces advance - Infantry, Bashi Bazook Cavalry and M/G. Unfortunately I got so carried away whilst playing the enemy forces I forgot to take pictures at crucial times . 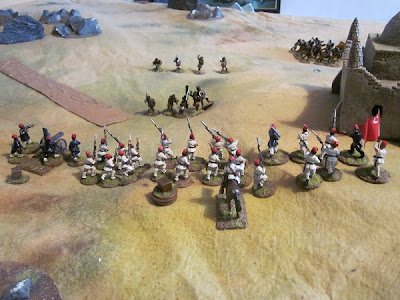 The Egyptians form line and break up the Fuzzy Wuzzy attacks (the coins are to track how much ammo a unit has) , the strip of fabric to the left of the picture is a Wadi that was generated by a drawn chance card . 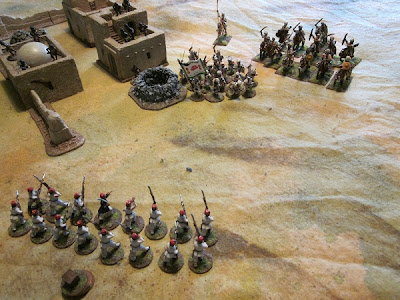 The Mahdist forces were moved onto the table by dice rolls and entry points diced for . Here Mahdist cavalry and Ansar prepare to stop the enemy from poisoning the well. 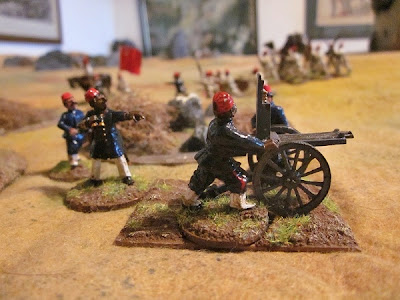 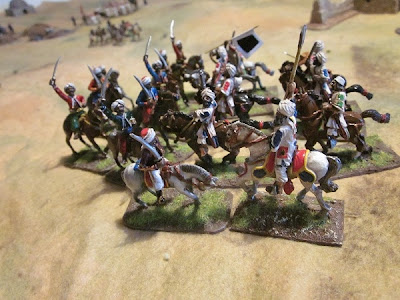 The Egyptian Bashi Bazooks clash with the Mahdist cavalry - and loose !.The Mahdist infantry units were hampered by casualties amongst unit command figures which prevented them moving a crucial stages of the game . 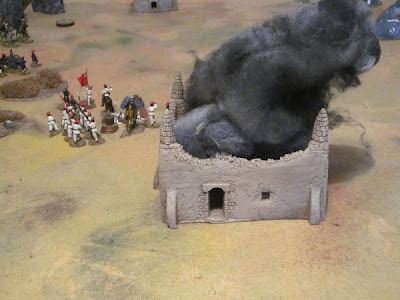 Although they took heavy casualties - their cavalry routing and a infantry unit getting massacred whilst in square, the Egyptians managed to place explosive charges and destroy the HQ . A victory to the Egyptians although a somewhat Pyrrhic one with the Mahdists preventing them getting the other two objectives. A great game played in about 2 hours with time for cups of tea and bacon butties !. (figures are mainly Old Glory with the odd Perry figure and the Bashi Bazooks are Castaway figures, click on photos to enlarge)
Posted by Mosstrooper at 05:53 1 comment:

Email ThisBlogThis!Share to TwitterShare to FacebookShare to Pinterest
Labels: TSATF 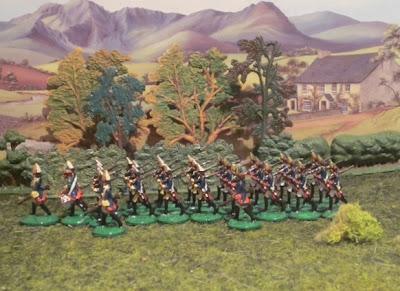 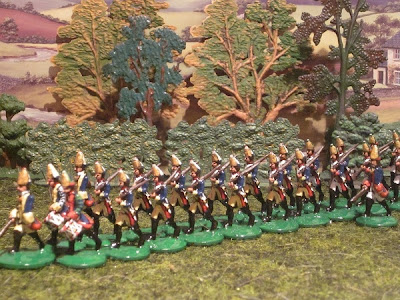 These are the Grenadier Battalion Jung-Billerbeck , it comprises of the Grenadier Companies of the Regiments Alt-Braunschweig and Zastrow . In reality the officers should  have tricorne hats not  mitire caps - but they look much cuter with them !.
Posted by Mosstrooper at 13:14 No comments: