A Merry Christmas To All 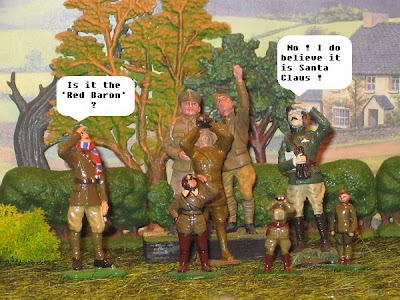 A Merry Christmas and a Happy New Year to you all .
Posted by Mosstrooper at 11:56 2 comments: 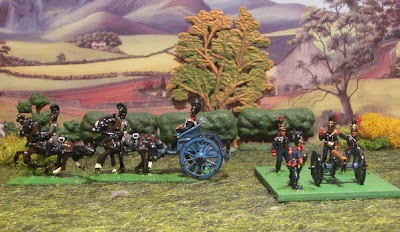 Been looking for a limber for my Bavarian Artillery for ages. The trouble being that the Bavarians had a unusual limber with a high back like an armchair so not just any old limber would do . It turned out that the only firm to do one in 28mm is http://www.lancashiregames.com/ . Alan was kind enough to bring me one down to 'Warfare' at Reading and I've finally got round to getting it painted . Although of a different design type to Foundry it matches well . (click on photos to enlarge) 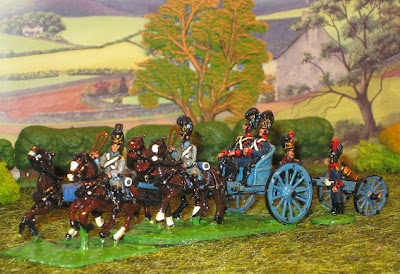 The Austrian Grenadier Battalion is finished. 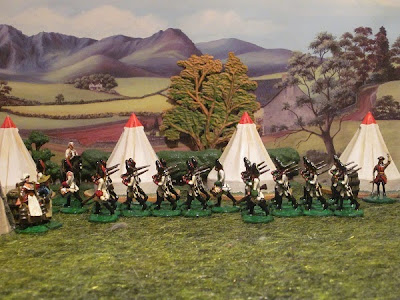 The Austrian Grenadier Battalion is brought up to strength with the addition of a company of Grenadiers from the Infantry Regiment 'Daun'. As they march into camp they are greeted by their comrades in arms. 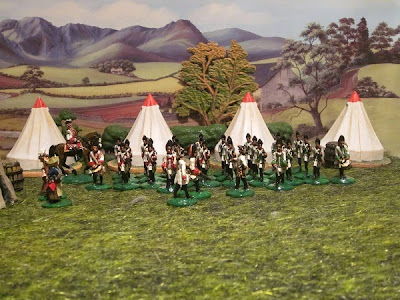 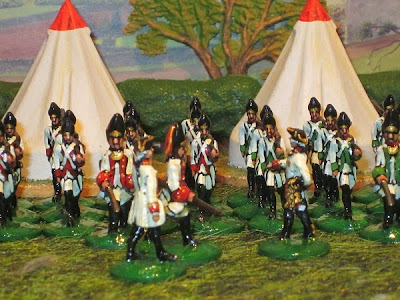 General Mouters is impressed by their drill and conduct and promises them action  against the enemy soon. Grenadiers are of course Spencer Smith , the Generals are Willie -Tradition , tents by ? can't remember - had them years.
Posted by Mosstrooper at 12:03 1 comment: 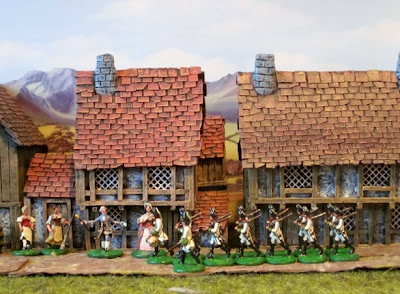 The Grenadier Company of the Infantry Regiment 'Luzan' on route to join the main Austrian forces in winter camp. (click on photos to enlarge) 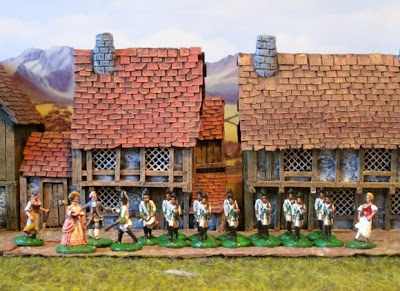 They halt to be inspected by the local Mayor and his good Lady wife (whilst one of the woman of the lesser orders tries to attract the bold Grenadiers from their duty). Grenadier figures are Spencer Smith's , the civilians are I think Tradition 'Willie' figures. Had these figures in storage for about 12 months and with my New Years gaming resolution to get existing lead painted before buying more I  thought it was time to get them started.

Prussian supply waggons guarded by Fusiliers move through a village . 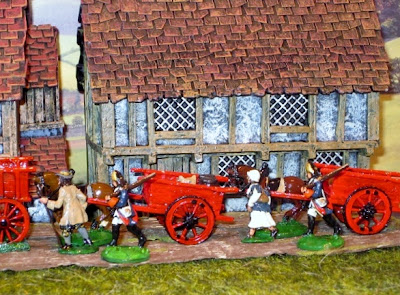 The waggons and teams are by Irregular , Fusiliers by Spencer Smith (converted Grenadiers) and the civilians from various manufacturers. 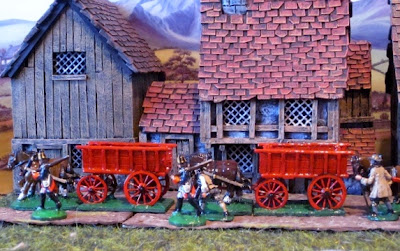 The figures are painted with Games Workshop Acrylics over a black spray undercoat and a high gloss varnish coat (Yacht varnish). Have some more Austrian Grenadiers to do to bring them up to strength( 24 figures + 3 Officers and 2 Drummers) and a Prussian Grenadier Battalion to start on soon .
Posted by Mosstrooper at 07:52 6 comments:

Finished Figures from the Painting Tray. 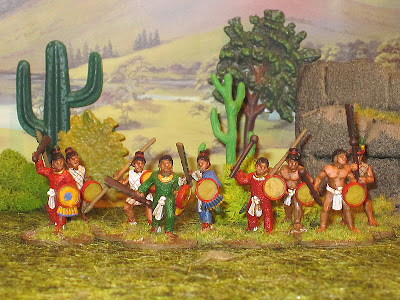 These figures have been waiting to get finished for ages , they are Aztecs in 28mm by The Assault Group . A bit plainer than Foundry but since that firm has stopped producing their Aztecs I  will have to rely on Assault Group for more reinforcements. 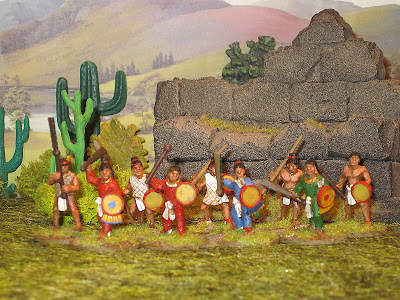 On  my other blog I have been deciding what to paint in the next year . http://tinsoldieringon.blogspot.com/2011/12/wargaming-musings.html so I will hopefully get some of the back log of already purchased figures finaly done. 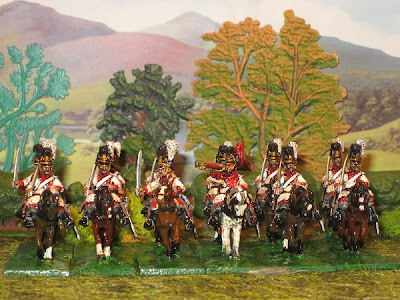 These are some Bavarian Chevaleger , I  have a lot of 28mm Foundry Napoleonics to finish painting in the coming year . 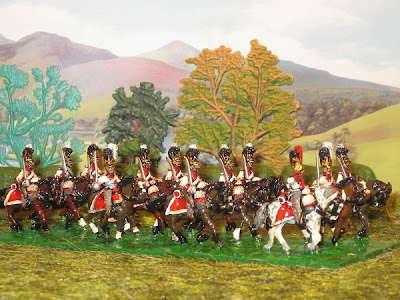 They have been painted in an 'Old School' style (click on photo to enlarge)
Posted by Mosstrooper at 09:07 1 comment:

Finished the game off this morning - as sometimes happens in FOW  if something goes wrong it goes MEGA wrong ! (click on photos to enlarge) 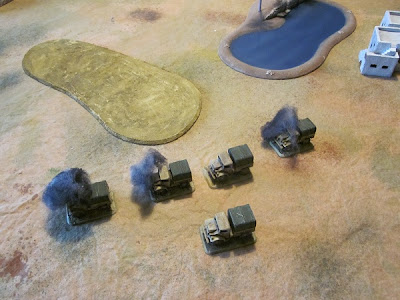 The Italian tanks shoot up the British Motor Company with M/G  fire - heavy casualties and they fail their moral and are removed ! - no British reinforcements arrive - Blast !!!. 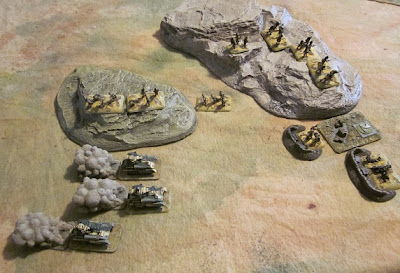 The British light tanks are unable to capture the objective from the Italians (appalling shooting !). 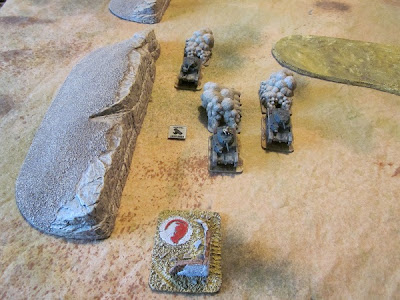 The Italian tanks capture the objective and with no British reinforcements they hold it and win the game !. Great game even though I  sort of lost again, getting to grips with the rules and am now off to paint up some more FOW troops (well we have to go shopping first and put up the Christmas tree so  I'm told !)
Posted by Mosstrooper at 05:27 1 comment:

I decided to replay the game I  had with 'A', as it was already set out . (click on photos to enlarge) 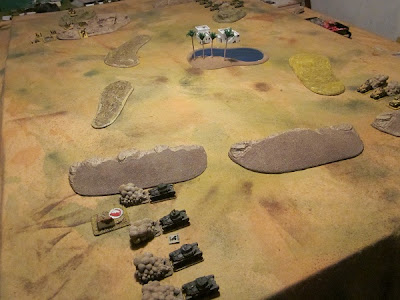 The Italian tanks guard the objective. 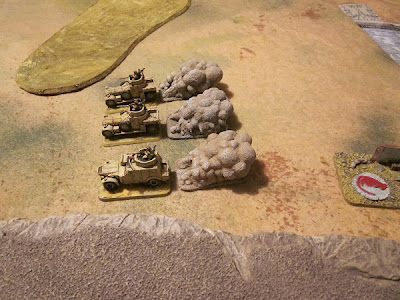 Opposing them A/Cars of the 11th Hussars . 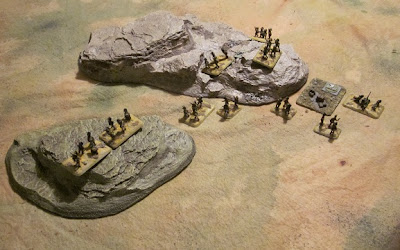 The Italian infantry hold the other objective with the Company HQ  covering it. 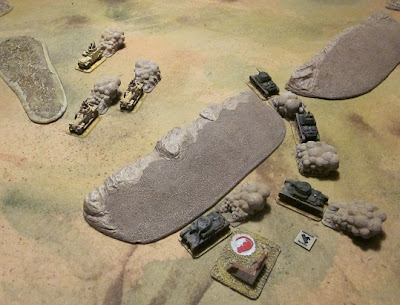 The Italian tanks respond to the British A/Cars bold movement. 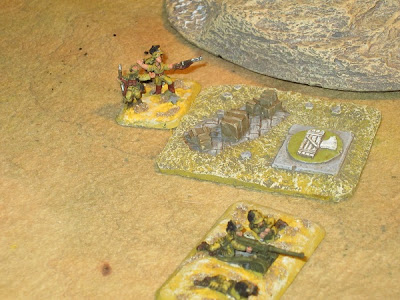 The Italian HQ  is shot up by the British A/Cars - take a moral test and pass , the 'Unknown Hero' rule comes into pay ! 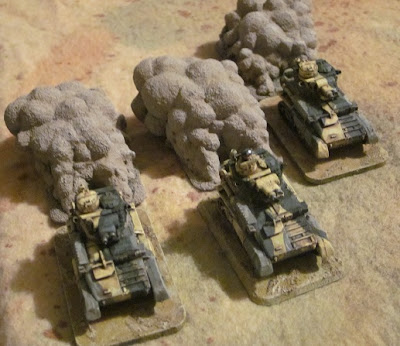 Reinforcements arrive for both sides . The Italians deploy their Mortar Platoon - and are massacred by the British Lt Tanks . 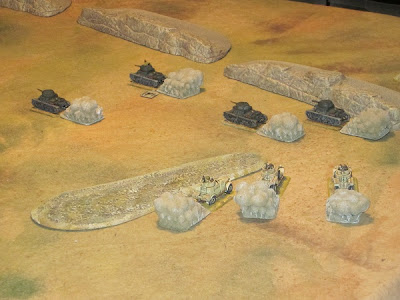 The Italians get another Infantry Platoon and place it on the other objective , allowing the Italian tanks to move aggressively  towards the British objective - hotly pursued by the British A/Cars. Too be continued........
Posted by Mosstrooper at 13:23 2 comments: