It was move 4 before the Prussians became alerted to the fact that they were being attacked . 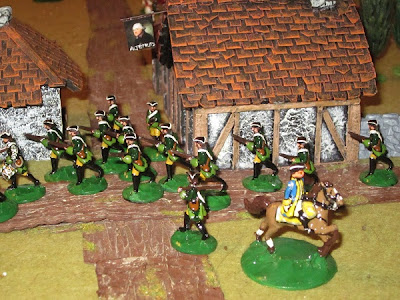 A messenger was dispatched for reinforcements as the troops swiftly assemble. 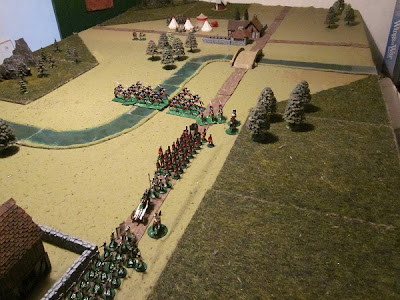 The Austrian force marches onto the table and the Hussars find and start crossing the ford . 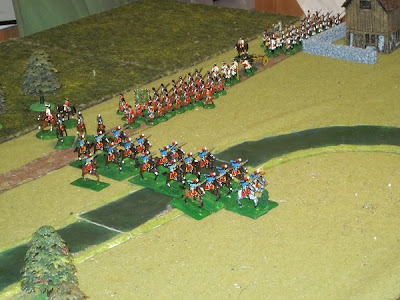 The Austrian commander Prince Karl Grunte decides to reinforce the Hussars with the Croat Grenz . 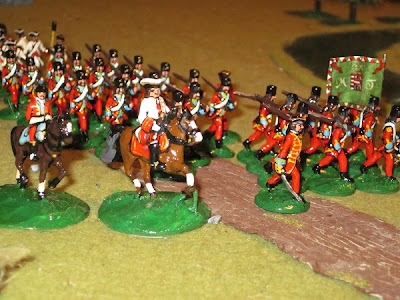 The Hussars having crossed the ford deploy into line and the Grenz follow them across the stream . 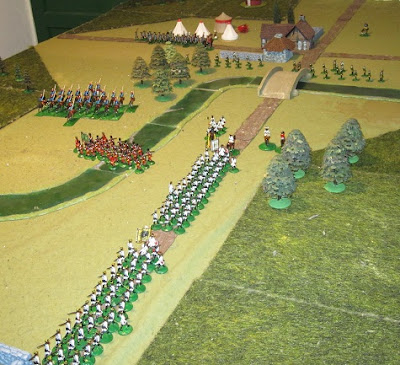 The Prussian Frei Korp form a line in front of the camp and the Jaegers deploy on their flank. 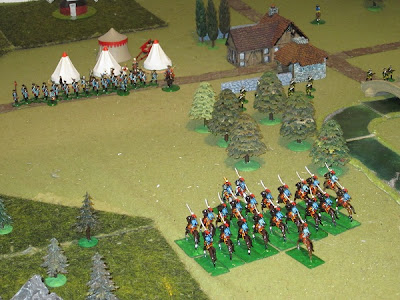 The Hussars managed to charge home even though they lost their Colonel and 3 figures , they broke the Frie Korp line and persued them into the camp . 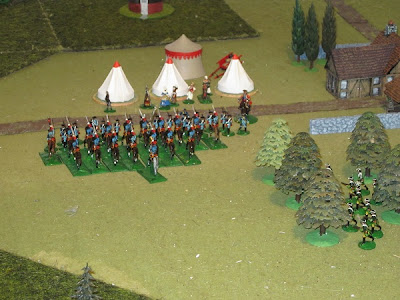 On the other flank the Austrian infantry column moved down the road and although under fire from the Jaegers surged over the bridge . 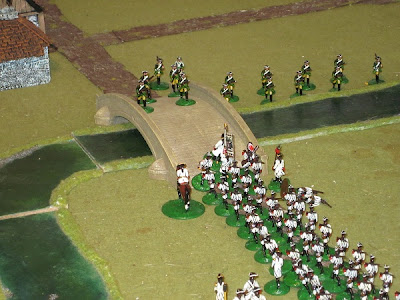 Things were looking black for the Prussians , when the first of their reinforcements arrived . 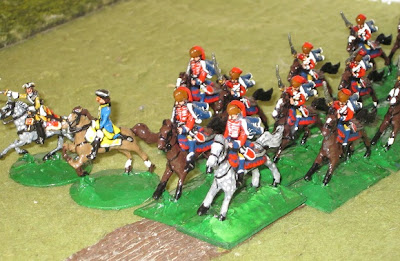 By the end of turn 10 the situation looks like this - 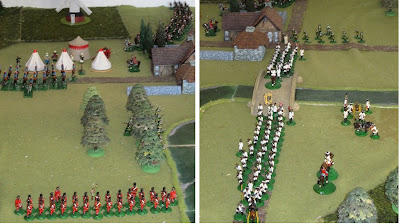 On the left flank the Hussars have destroyed the Frei Korps , but have not yet managed to rally . The Grenz deploy ready to drive the Jaegers out of the wood - however the Prussian Hussars are moving up the other side of the camp. On the right the Austrians are across the bridge driving the Jaegers before them . I  have been playing this solo using Grant's rules with  modification - units being activated by the turn of playing cards .( red = Prussia black = Austria) . This system I borrowed from 'Lead Gardens' blog , casualties are allocated by card also (Face card = officer casualty).The system works well and there is no need to write orders , which is not practicable in solo play .
too be continued....
Posted by Mosstrooper at 12:35 No comments:

I have decided to run a sort of mini-campaign comprising of 3 battles linked together by the result of the previous battle. The first one will be -Capture the bridge , the idea being that the Austrians running short of rations and fodder for man and horse decide to cross into Prussian territory and pillage the local resources . So the first battle is a raid to capture a river crossing guarded by a small Prussian force comprising of a battalion of Frie Korps and a Jaeger Battalion , the Prussians have other troops off table which may or may not come to their aid depending on dice rolls. The Austrian force is lead by a regiment of Hussars and a battalion of Croats supported by 2 battalions of line infantry and battalion gun . 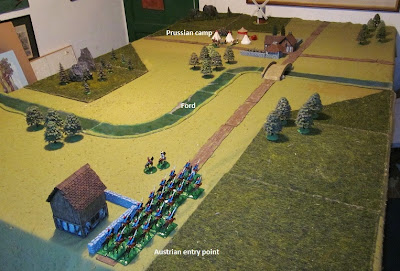 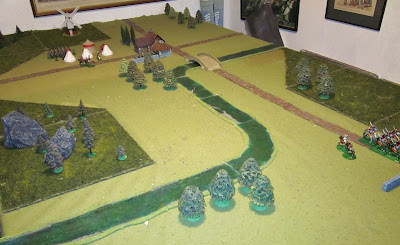 2 views of the battlefield with the Prussian camp laid out near 'The Alte Fritz' public house guarding the bridge . The Austrian Hussars can be seen entering the table . The Austrians have been given information of a ford down stream and are planning to use this in their attack . 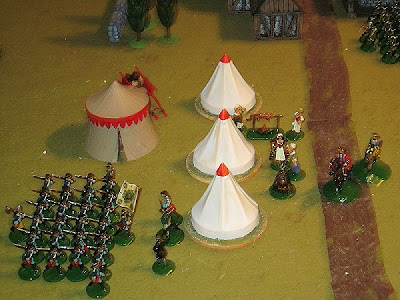 All is quiet in the Prussian camp as the Frei Korps battalion have their morning parade , the Jeagers are billeted in the pub and surrounding buildings  and have not turned out (I wonder why ?). 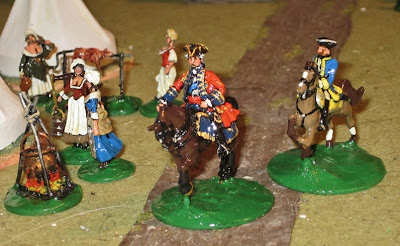 The Prussian commanding officer Hertz Van Hyre ( a dutchman in Prussian service ) goes for his morning ride to inspect the camp , little knowing the impending threat . to be continued ........
Posted by Mosstrooper at 23:46 No comments: 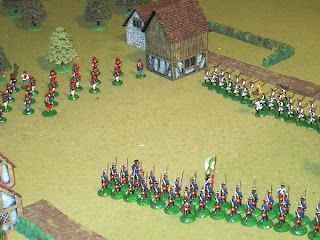 The Austrian Pandour Lt infantry emerge from the wood onto the left flank of the Prussians , and start causing casualties . 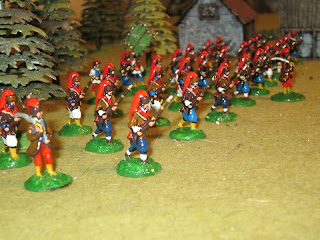 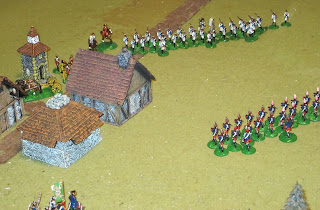 Due time restrictions it was impossible to take this game any further , at this point it was a draw . The rules worked well although I think I would increase the movement rates as these where a little slow . 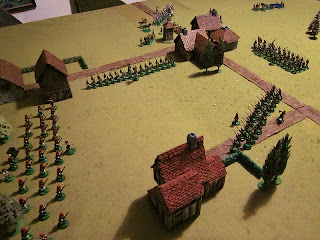 The final position of troops at the end of the game , I will certainly be using these rules again as they gave a 'Old School' feeling to the game .
Posted by Mosstrooper at 10:56 3 comments: 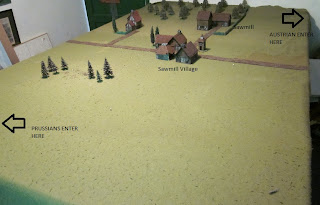 The battle field is based on the classic Grant scenario 'Sawmill Village' . I'm afraid the hills don't show up on this photo . 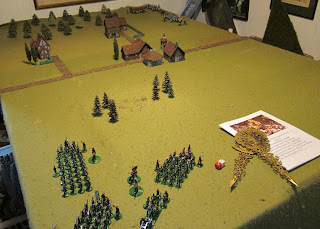 The armies march on, I was using double moves till the forces came within 24" . the rules ' Nostalgic Whim' use a variable movement for units . 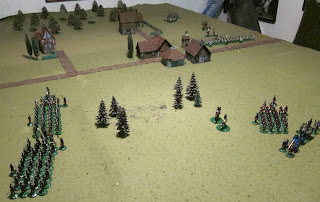 The Austrians moved faster and deployed a foot battalion North of the village and their lt inf Pandours moved through the wood to the West . The Prussians split their forces - the Grenadiers and the gun move to the North of the wooded hill and the 2 Line Battalions move slowly to the South. 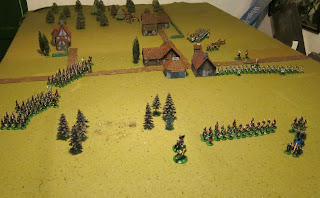 The Prussian Grenadiers deploy to confront the Austrian line , the other supporting units on both sides are slowly moving up .

The Prussian Regt Von Finck move up to deploy South of the village . I think I would use triple movement to speed things up in the future . Part 2 to follow -
Posted by Mosstrooper at 04:17 1 comment:

These are some photos of the FIW figures that I am painting up . They are Redoubt figures which are a bit chunky but paint up easily . 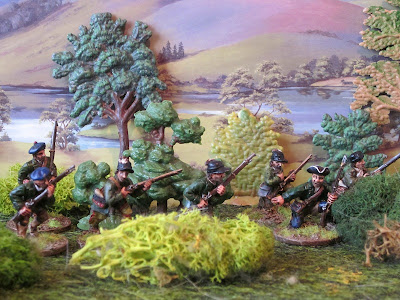 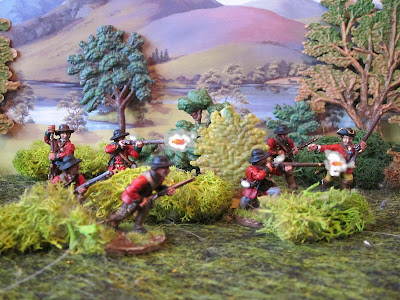 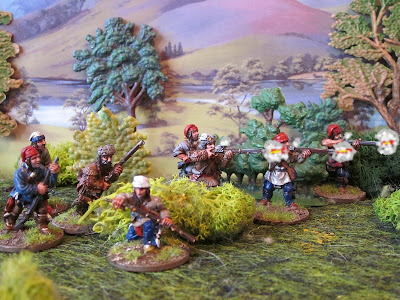 They are Rogers Rangers , British Light Infantry - 55th Foot and French Coureurs De Bois . I am not sure which rules to use with these figures - there are plenty out there . Have just got a copy of Charles Wesencrafts 'Practical Wargaming' which have a set of SYW  rules , these where use in a FIW scenario in the latest 'Classic Wargames Journal' and look interesting - they use groups of 6-8 figures , so when I get enough figures painted I will give them a try . Click on photos to enlarge - and I have been messing with Photo Shop hence the gun smoke !.
Posted by Mosstrooper at 09:01 1 comment:

The mounted Generals are a mixture of Willie and Spencer Smith , the Bosniaks are by Irregular. The dismounted staff are I think Stadden and the camp followers are Foundry , wagon and table by Irregular . I hope to do a battle report in the near future as I am keen to try out a new set of rules 'A Nostalgic Whim' ,which have been written by the proprietor of the Independent Wargames Group . They are a amalgamation of Featherstone, Grant and various other Old School rules . they look good so I can't wait to try them out.
Posted by Mosstrooper at 05:15 2 comments:

More Photos of my Collection


Most of the figures are Spencer Smith, (with the odd Willie General) not to every bodies taste - in their plain casting state a bit of a shock to gamers brought up on Perry or Foundry . But to me they have there own antique charm and they are cheap and VERY easy to paint on mass !.I find I am able to paint detail onto them easily and so each figure becomes a one off individual. I started painting them over 2 years ago and I'm pleased to say they have had a lot of use on the table since then . (click on photos to enlarge)
Posted by Mosstrooper at 12:50 No comments: