Well its taken all week but I have finished off 'A's 92nd Highlanders , quite enjoyed painting them but - phew - 32 of them was enough !

'A' is going to base them in his own style to match the rest of his collection and fit the flags and flag poles himself. 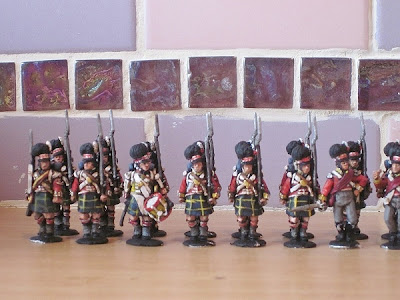 Sorry for the somewhat discordant tiling but our bathroom has the best light at this time of day. 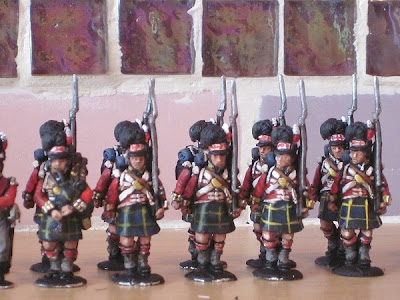 When my wargaming colleague 'A' said 'would you I like a commission to paint some figures for me ?' I should have been suspicious as he usually paints his own , then he told me they were Napoleonic Highlanders ! . Now there may be more complicated uniforms to paint but I can't think of many (peraphs Hussars ?) so it was with some misgivings I said yes. He also wanted super detailed Perry figures to add to the pain .

Well I buckled down and got the centre company figures done , I looked at a couple of uniform sources and they disagreed on the tartan - the problem with tartan is getting it to look right at a 'wargaming distance' of about 3' . Once I got started it was not to bad and I must admit I quite enjoyed painting them . Half done half to go !.

It must be a sign that I'm getting older but the thought of reading a new set of rules does not fill me with joy . Its probably my fault - God knows how many sets of rules I've read and tried to learn in the last 40 odd years , then having learned them I played them for a while and then moved on to the next exciting and better (?) set !. The trouble is being a wargaming butterfly I have flitted from period to period and returning to them after a break you have to try and remember them again , then there's the problem when they blend into each other and that rule you have been playing from rules 'A' is actually on consulting from rules 'B'. The rules produced now are beautifully produced hard backed glossy affairs - but are they any better than the flimsy illustrationless ones of my youth ?. The rules that I seem to remember best are of course the simplest sets - 'The Sword & The Flame', Charles Grants 'The Wargame' and 'Triumph & Tradgedy' being my old favourites , am a big fan of 'FOW' and have played them a lot recently but when I give them a break I think they are complex enough to have to be re-learnt . Some rules I never got to grips with - 'DBM' springs to mind and I shudder when I think of 'WRG 6th edition' and those blasted 'Newbury' sets of rules !- their 'fast play' sets were as long as any legal document and anything but fast play !. In my gaming career I started with Featherstones simple sets of rules-then to prove how accurate they were rules got complex , luckily we have returned to simpler D6 type mechanisms (Black Powder springs to mind) but to sell they seem to have to be hard backed gloriously illustrated volumes - but this of course does not automatically make them better rules . After all this I still do find myself seduced into buying new sets of rules but I not sure how many of them I will play , clever simple sets like 'Muskets & Tomahawks' are probably in line to join my 'best remembered sets of rules' whilst 'Hail Ceaser' were sold on to my gaming comrade 'A' almost unread - their very size defeating me. I think being a solo player a lot of the time has a bearing on my choice of rule sets , solo gaming needs simple easily remembered rules that allow the game to flow and give a 'narrative' type game - and get a result !. Well enough of my ramblings - oh there's another set of rules the postman has delivered !. 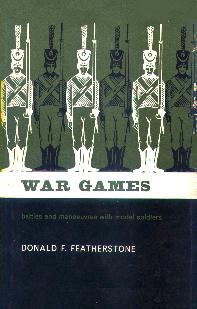 The book that started it all.
Posted by Mosstrooper at 22:23 8 comments: 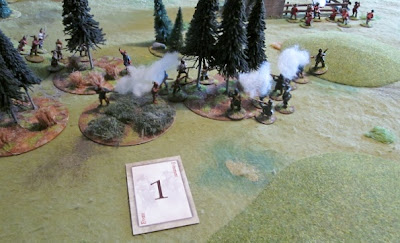 The second move started with event card 1 , this triggers a dice roll on the event charts . This meant that there was a friendly fire casualty on the unit of Rangers , who took a moral test and recoiled. The British Lt I nfantry reached the buildings but took casualties getting there. 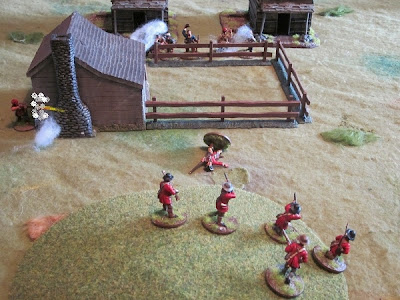 They were shot at by flanking enemy units and because they did not have cover took heavy casualties and recoiled , the Officer was left behind and was shot at by the Canadian Militia , oh dear ! things were not going well for the British. 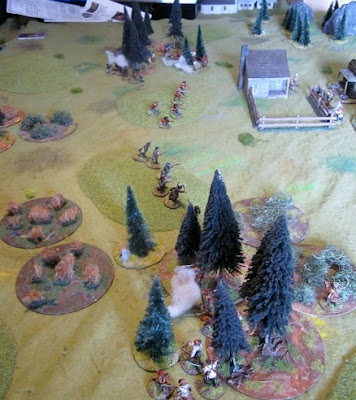 The right flank unit of Rangers charged and destroyed the French unit of Coure De Bois, but the Lt Inf. in the centre took further casualties. 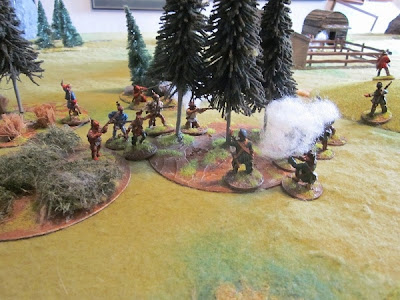 The Ranger moved across to boost the morale of the suffering Lt Inf. just as the Rangers he left were charged by Indians, diced abysmaly and were destroyed. 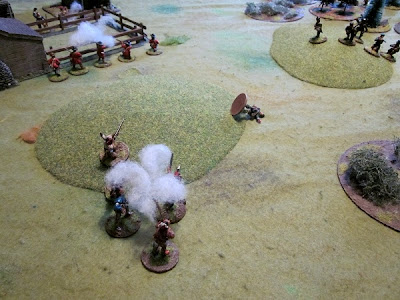 The Ranger Officer managed to get the Lt Inf. to move forward again but was shot by a unit of Indians flushed by massacaring the Rangers . 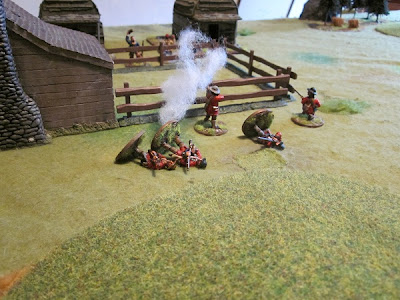 The isolated Lt Inf. took casualties from another Indian unit to their rear flank and suffered 3 casualties - and routed ! . The French had won ! having caused 2/3rds casualties on the British. 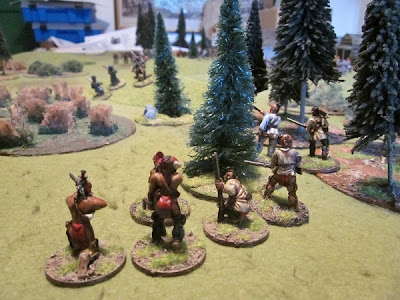 The men of the match ! , this unit caused major casualties on the British centre . The British lost the battle because they tried to attack the buildings before clearing the flanks and were constantly caught in the open - hence the heavy losses . The French were lucky with the run of cards at times and with their dice throwing . A great game , the system plays solo very well , the card draw adds uncertainty to the game and the shooting , moral and melee rules are simple to remember. 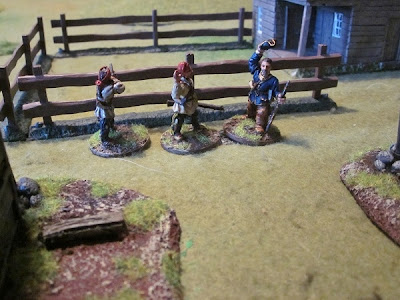 The French celebrate their victory !

I have been planning to try out a 400pt M&T game on a 6'x4' table and after several 200pts games think I have got the hang of the rules now. 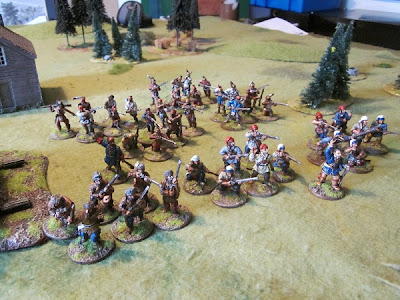 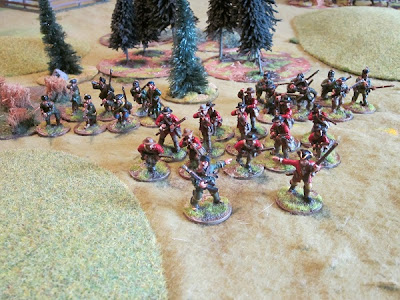 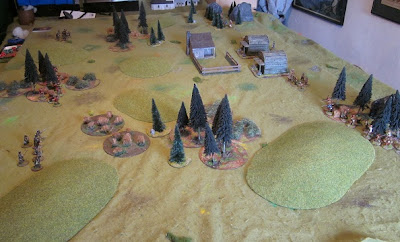 The British force got 'Raid' as their objective (burn the French trading post) and the French also got 'Raid' which was changed to 'Engagement' (only one side can have 'Raid' objective) and had to drive the British off with 2/3rds casualties. The side plots were , for the French 'Truce' (not to open fire first) and for the British 'Rivalry' (British Lt Inf Officer to cause more casualties than the French Officer). 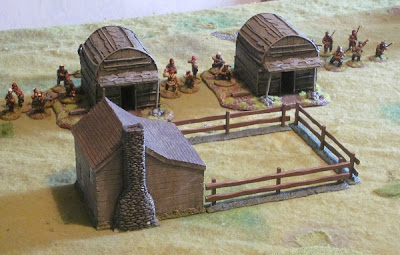 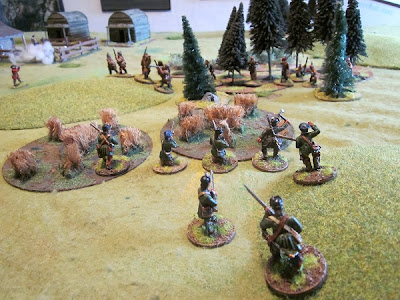 The British plan was to attack the settlement and burn it down with the Lt Infantry whilst the Rangers covered the flanks , above Rangers engage with the French Coure De Bois and Indians on the left flank. 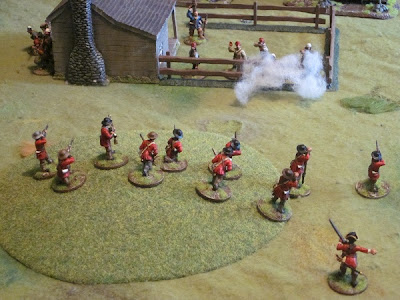 The British Lt Infantry move forward to engage the French Militia in the trading post . The French units had a run of cards which enabled them to get into position to occupy the buildings and woods covering the flanks . The French lost their side plot by opening fire first - the Lt infantry in the open was to good a target to miss ! . The first move ended with the sides evenly matched ...... Too be continued.