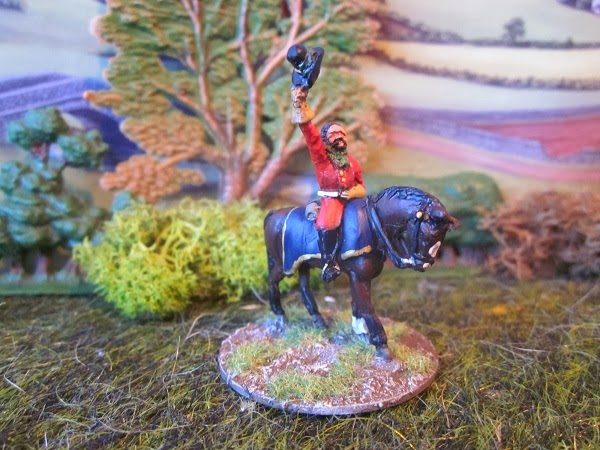 Its been a while since I posted anything about my Garibaldi/Red shirts project . It's been chugging along in the background slowly and it's nearly got to the point when I have enough for a game - using Black Powder. Here is a command figure for the Garibaldini , a Irregular figure of course . 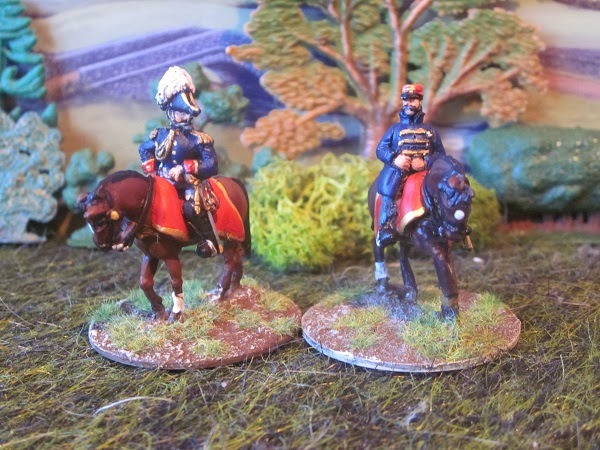 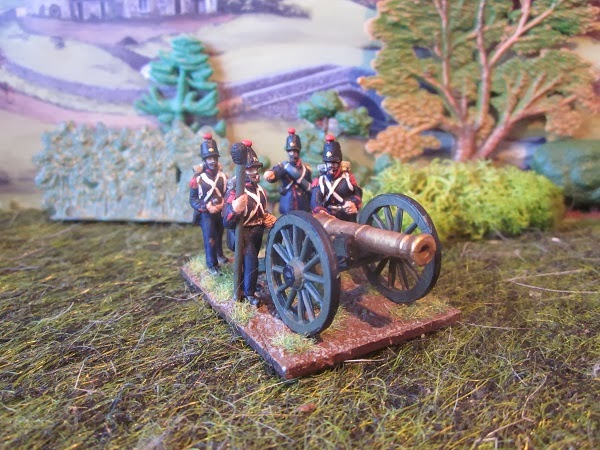 A Neapolitan gun and crew. 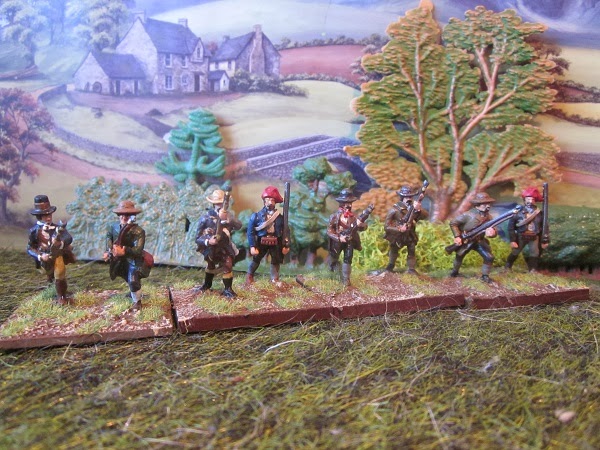 Garibaldi's Sicilian Volunteers 'picciotti'. There are lots of references to these in his early battles but not much in the way of uniform/clothing description . I decided that Spanish Napoleonic guerrillas would be the nearest I would get , the next problem is size - the Irregular figures are quite small - true 25mm and lots of modern figures do not look right with them . I thought I would try Hinchcliffe - they do a limited range of Spanish , so I mixed in a few AWI  militia . They will count as Irregular skirmishers and be in 2 small units when finished. 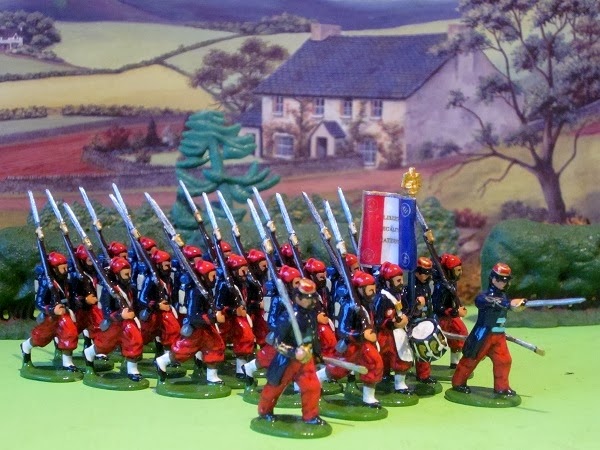 In all the excitement over the Don Featherstone Memorial game I forgot to post any photos of the finished French Zouaves . 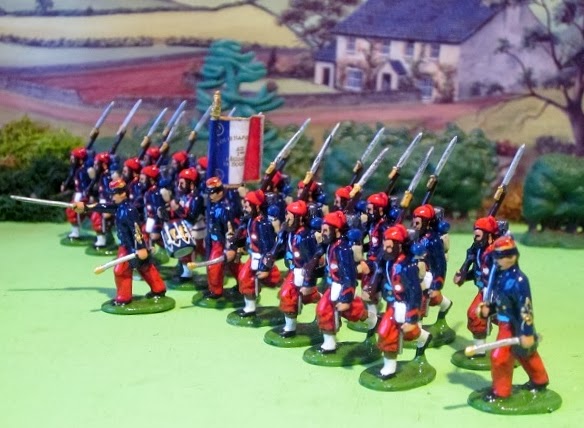 People may have caught a glimpse of them in the battle photographs but I think they should have their own photo shoot. 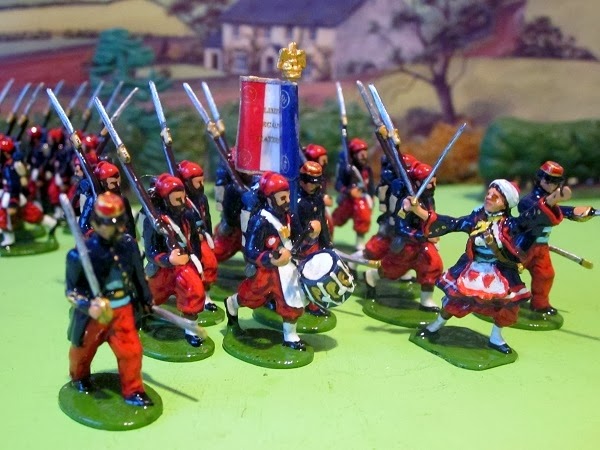 Here we see them being urged on by their Cantiniere Marie Ann . 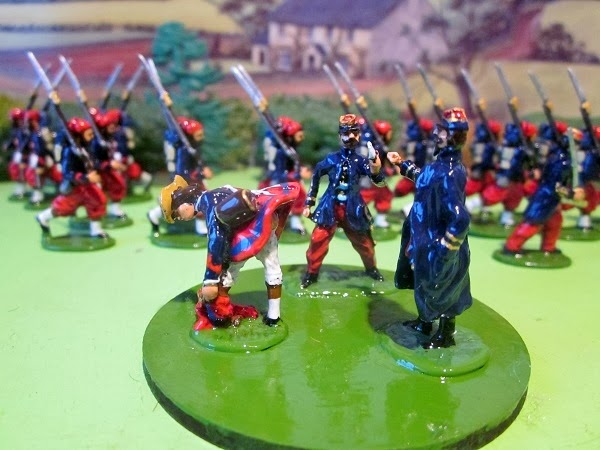 I also glued up the French command group onto a base - the French CinC seems to be distracted - no wonder they lost the war ! . I've only got a couple of line battalions and a couple of cavalry units to paint up to finish the project , so I will be sending off an order to Spencer Smith soon .

Because my wife was working over Christmas I had more time on my hands than usual , so I took the opportunity to get this ACW  Zouave regiment painted. 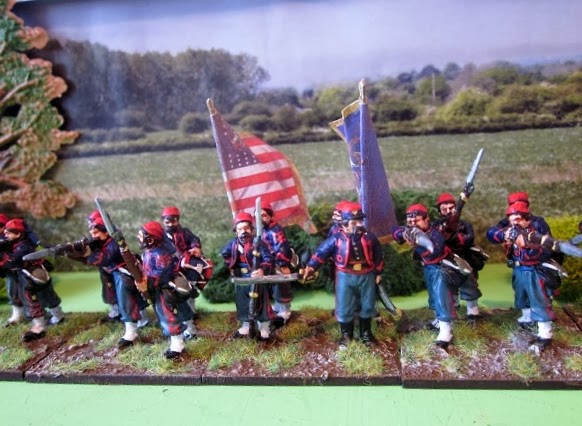 It is the 10th New York (National Guard Zouaves) and the figures are from the Perry's range. 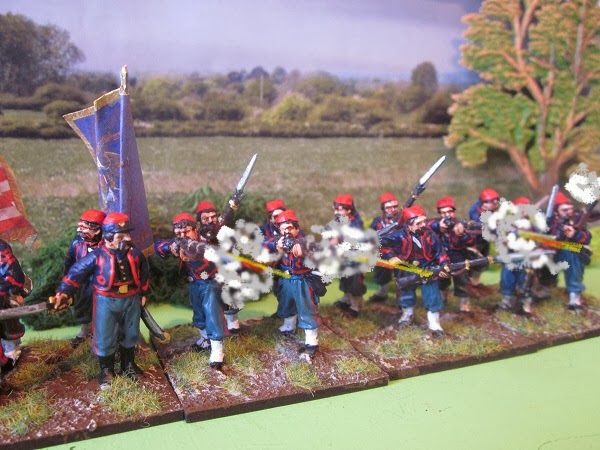 I'm pleased that I have managed to start getting rid of the accumulated ACW  lead mountain as this was one of my New Year Wargaming Resolutions !

Limbering Up For The New Year.

One of the things I dislike to paint is Limbers and Teams , they are expensive and don't get used a lot BUT they do look nice when finished and are impressive on the table , here is my Union team and limber for my ACW  army , a Perry model - very nice but the designers have left you with no method of attaching the limber to the horses ! - without modelling correct traces etc . I resorted to a thin metal pin inserted into the horses flanks and painted black to avoid people seeing it ! 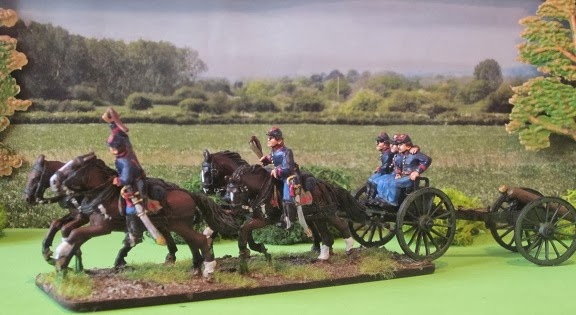 Another view of it , I have a Confederate one to do as well when I get around to it. P.S. Blogger seems to be working again !

I am having problems downloading photos to Blogger , so there may be a (hopefully) short break till normal service is resumed.
Posted by Mosstrooper at 04:13 2 comments: