Russian Tank Production and a Milestone 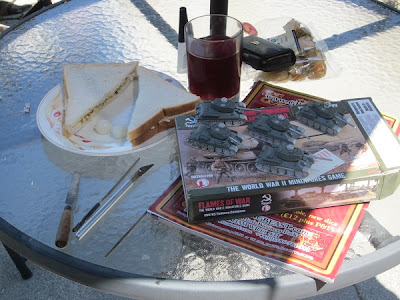 Beautiful day just what you need for gardening - however I assembled some Russian FOW  tanks instead ! , seen here with my modest repast for lunch - cheese and Branston pickle sandwich . After my successful games of FOW  in the Early Desert period  I decided to branch out into something entirely different - 1944 Eastern Front . As a wargaming group we can be rather conservative in our forces - very middle of the road sort of thing , so I'm going a bit more radical - two tank based forces . I have also just noticed that this is this blogs 100th posting ! Huzza ! - here's to the next 100 .
Posted by Mosstrooper at 13:18 1 comment: 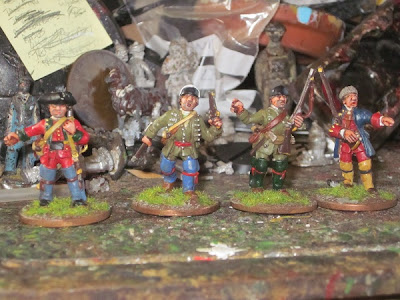 Inspired by several successful games of 'Muskets and Tomahawks' I have painted up the above personality figures from
http://www.gallopingmajorwargames.com/index.htm They are from left to right- Ranger painted as British Officer in campaign dress , two Ranger Officers and a French Officer in Campaign dress. I've also made up two stats sheets for the various combatants. 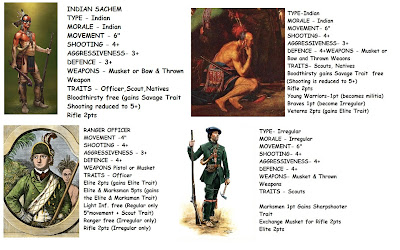 The British and Indians. 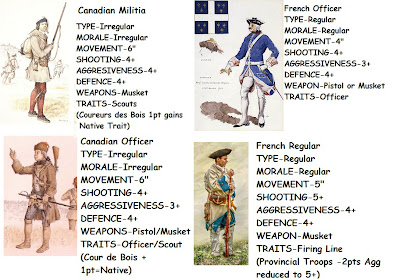 The French.
These rules are very simple to use but very clever with there use of scenarios and the subtle differences in troop types.

Posted by Mosstrooper at 10:07 No comments: 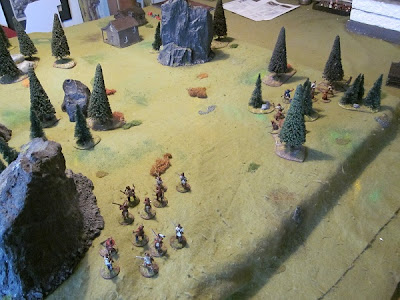 The Indians set up - they have to burn the log cabins to win. 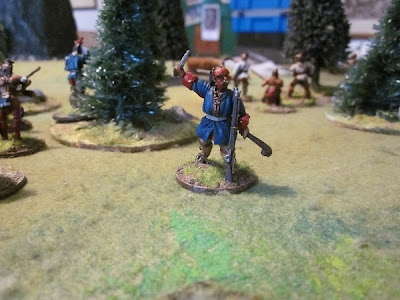 The Indian Chief - Bluejacket (guess why ?) 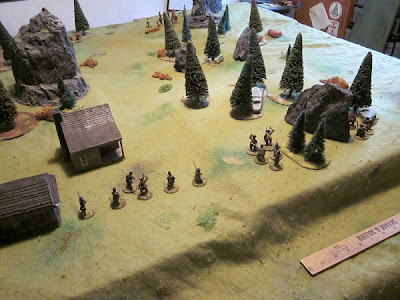 The Rangers set up - they have to move into each table quarter and the exit the board to win. 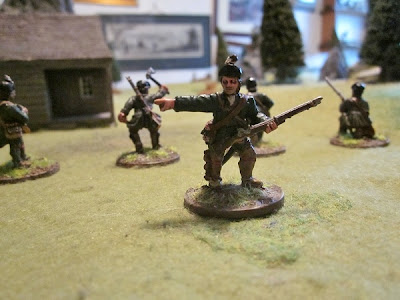 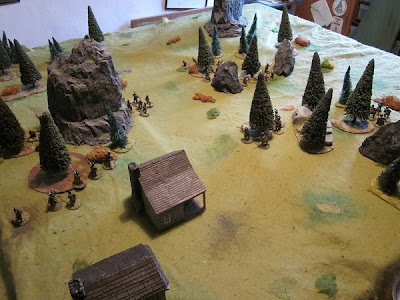 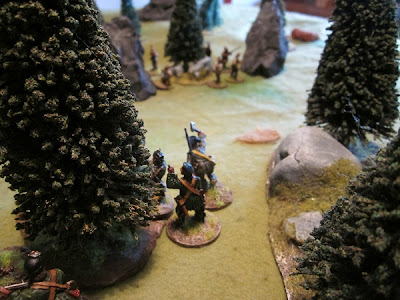 The Rangers spot the Indians across the open ground . 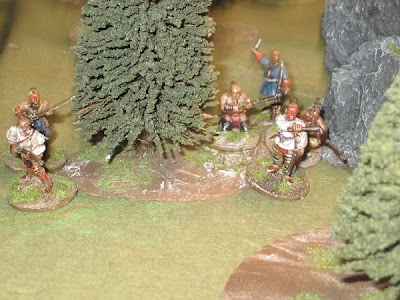 The Indians sneak up through the woods - their moral is better in cover and they are harder to hit. 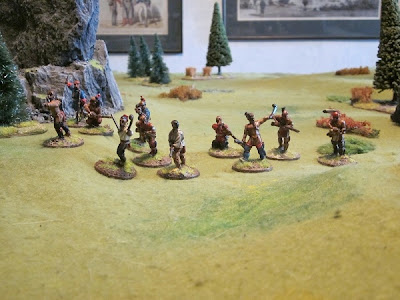 They make a dash for the cabins. 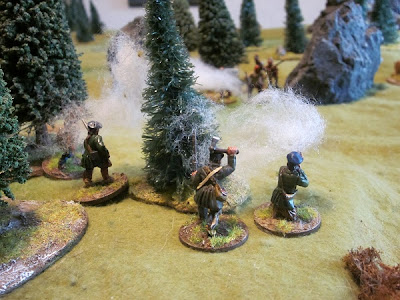 A fire fight breaks out- rather inconclusive due to range and cover. 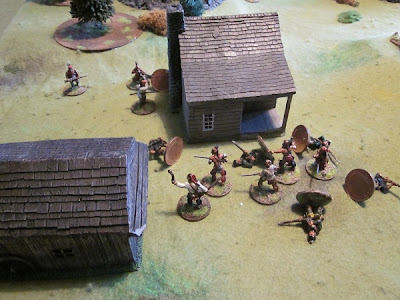 The forces clash and the Rangers are slaughters- rolled VERY  poor dice ! and the Indians start to try and set fire to the buildings. 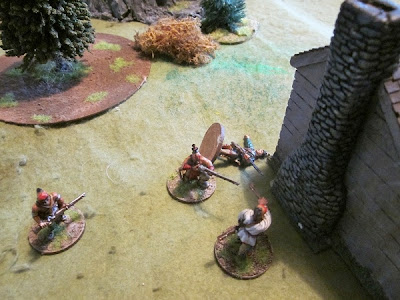 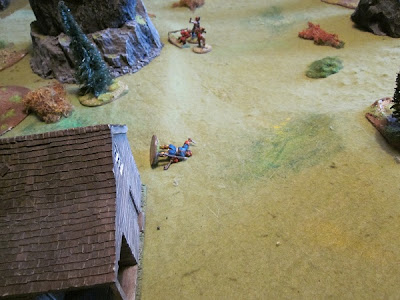 The Indian leader Bluejacket is sniped !. 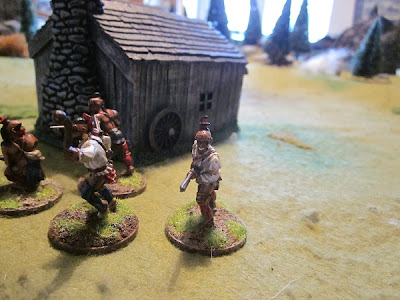 Having set fire to the cabins the Indians are driven back by musket fire. 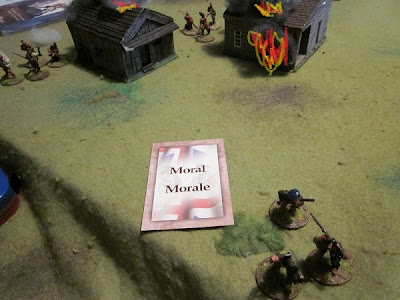 However at the crucial moment the British morale card turns up and they fail it and recoil off the table - the Indians win !. At times a close game but the Rangers losing the melee and their officer was the beginning of the end - having taken 50% casualties the British morale card is added to the deck and when drawn the remaining groups have to take a morale test at a minus . Luckily the Indians managed to set fire to the buildings and complete their mission before their mounting casualties caused a problem. I enjoyed the game and learnt a lot - be more careful with the Rangers , they are good but they are not many of them so you have to be cautious with them . The Indians were lucky in this game and their moral is easily broken with casualties and in the open . Going to play another  game using sub plots which will add another twist to the game. 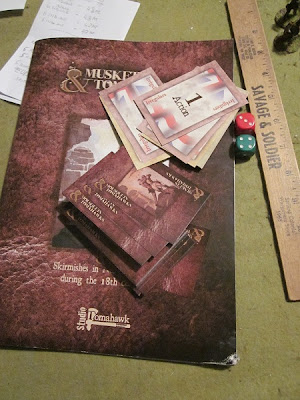 One of my purchases from Salute this year was 'Muskets & Tomahawks'  written by the people that brought you 'Saga' Dark Age skirmish rules. I have been trying out various FIW  rules over the years having painted up quite a few Redoubt 28mm figures but none of them grabbed my imagination . These are a card driven set , which I like as they are easy to play solo and stop mid-game and pick up and start again later. They use D6 and seem quite easy to learn , one of the interesting thing I like is a scenario generator ( I'm rubbish at thinking up scenarios) which gives objectives for both side and you can add sub-plots and random events to further spice up the game. 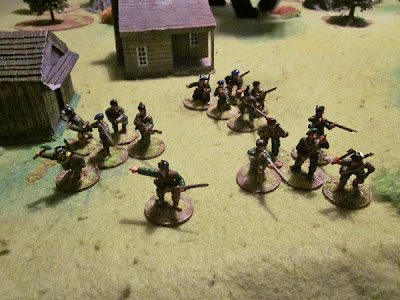 This is my sample 200 points British force which is made up of 3 groups of 5 Rangers plus a Officer . They count as Irregulars and are Elite . 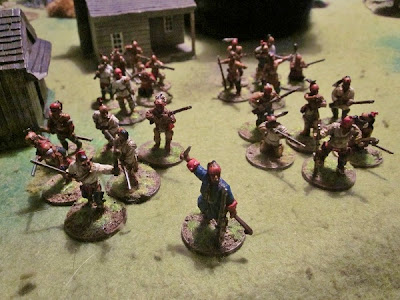 The Indian opponents 4 groups of 6 plus a Leader , they are classed as - no surprise- Indian and are savage  (figures are mostly Redoubt) 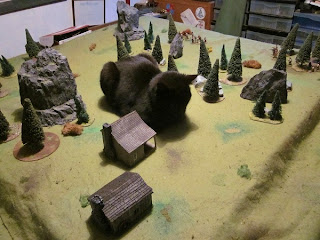 The battlefield for 200 points per side - the smallest game - is a 2'x2' table . The small black cat is optional . The scenario was diced for , the Rangers got 'scout' so they have to cross into each table quarter and back off the table . The Indians got 'raid' , they have to burn the settlement down . As this was my first game I decided not to have sub-plots . The card deck is made up for this game of 4 Indian cards , 4 Irregular (Ranger) cards and 2 'forward boys' cards (these give officers extra moves) Having got this all sorted - and the cat removed the game can start. (Sheba the cat has a nasty habit of trying to chew the tops of model conifer trees so has to be closely supervised in the gaming room)    Too be continued.......

Having painted nothing but 15mm FOW vehicles for the last week or two I decided to have a change and do some more from the pile of lead that hides under my wargaming table .

Sorry for the poor lighting on these photos , I normaly photograph miniatures in the bathroom (!?) and my wife was having a shower so I was banned from using it .(trial and error has lead me to the belief that our bathroom has the best lighting conditions in the house !)

These figures are some of the Foundry figures I got in one of their deal about two years ago ( Foundrys prices have rocketed since then - so any more will have to be got off EBay) . They just need a coat of varnish to finish them . The bases are by Warbases.

Been playing lots of  FOW  lately within our group of gamers and this has inspired me to finish off my British tank unit. 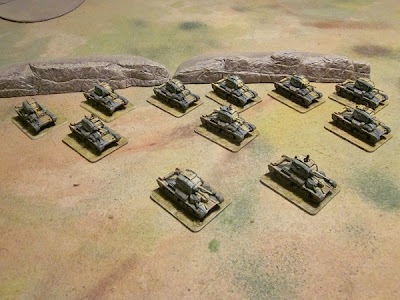 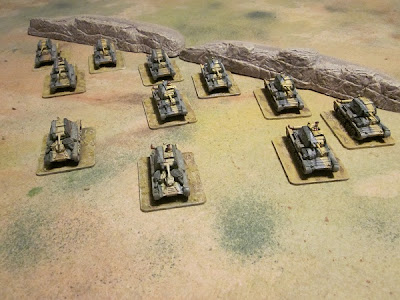 Organised into 3 platoons each of 3 tanks and a HQ  of 2 tanks . 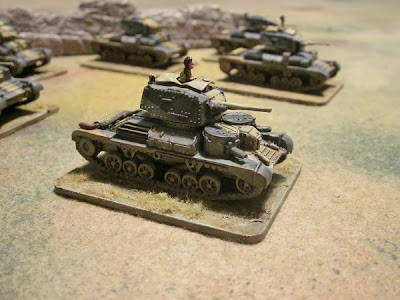 Company commanders A9, rather antiquated - but very cute I think with the two MG turrets .